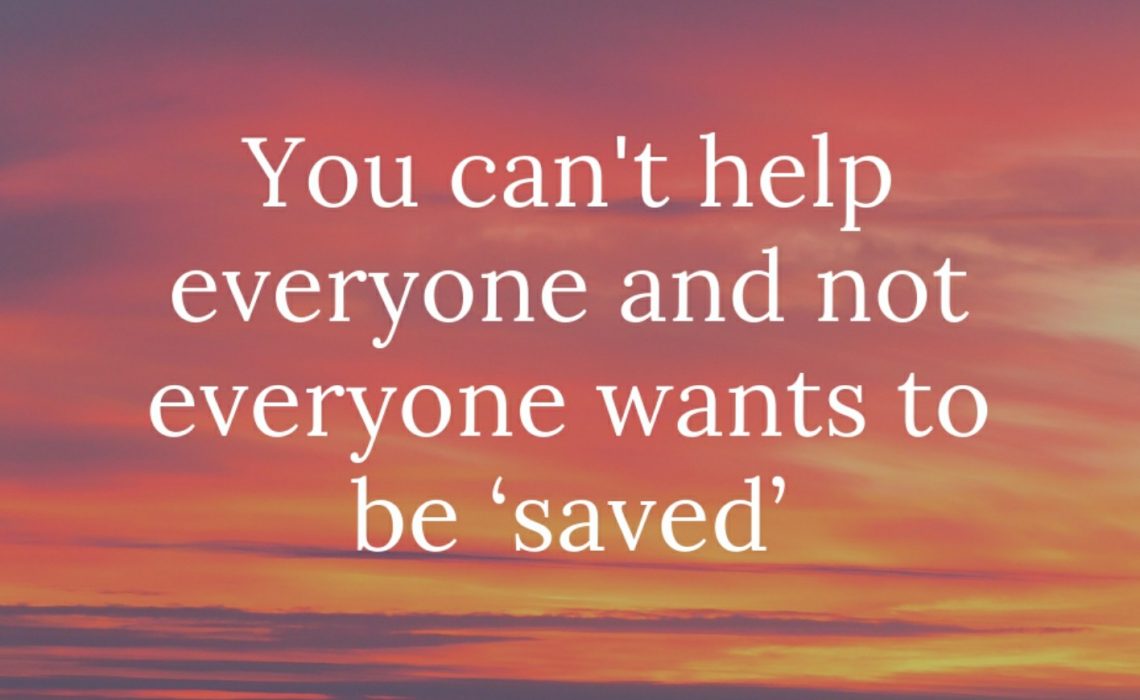 Foreword: I wrote this piece a few months ago and I have been waiting for the ‘right time’ to post it. But I’m not sure there will ever be a ‘right time’; so I’m going to be brave and post it now. I’m the sort of person who sees the good in everyone. My empathy dial is always set to max, so I feel everyone’s pain like it’s my own, and I feel compelled to ‘help’ everyone I meet. But the truth is I can’t help everyone and not everyone wants to be saved. There have been times in my life where, unknowingly, I have sacrificed my mental health in my attempt to help others. This post describes one of these times.

In my mid twenties I met someone and fell in love – sounds idyllic, right? But this someone turned out to be anything but my knight in shining armour. He was abusive, controlling, vicious and full of jealousy.

I was going through a transition period in my life. I was losing a lot of weight – 5 stone up until I met M, and I was trying to rediscover myself after depression had dominated my teenage years. I had returned to college and my life seemed full of potential and possibilities.

M was everything I thought I wanted in a partner; he was a rebel, he had long hair, he was good looking and a heavy metal fan like me. He was kind and vulnerable at first, and I instantly warmed to him. He doted on me and confessed his undying love almost immediately. I should have seen the signs but I was distracted by all his attention, I had never been adored this way before.

Quite early on in our relationship he started showing signs of jealousy and wanting to control my actions, what I wore and who I spoke to. At first I wasn’t alarmed by this, in fact I saw it as a sign that he loved me so much he couldn’t bear me being around other men – I admit, I was naive. M was my first serious boyfriend, I was flattered by his attention and adoration.

His controlling behaviour soon escalated. I continued to lose weight and this attracted attention from other men. If I even smiled at another man he would call me a whore and accuse me of having an affair. He would put me down saying; “You have the figure of a boy!” or “You don’t even look like a woman anymore”

M was a ex-heroin addict and an alcoholic. He was abused as a child and spent time in care. I know he suffered with depression and had attempted suicide on a few occasions, and I wanted to help him. I wanted to find a way to comfort him, to make it all better. I wanted to protect him from his demons. I thought my love and kindness would be enough, but by staying with him I only caused myself pain.

He would come home drunk and start shouting obscenities at me. Some of the vile things he used to come out with scared me so much. The venom in his voice, the hatred in his eyes and the threat of violence were, in a way, more painful than the physical violence that followed. The saying goes; “Sticks and stones may break my bones, but words will never hurt me” but that’s not true. For me, the words were just as damaging, and the effects lasted much longer.

He experienced blackouts when he was drunk, so he would wake up in the morning like nothing had happened. I would beg for an apology or some kind of explanation for his behaviour but, because he couldn’t remember any of it, he just shrugged and walked away.

If I ever talked about leaving, M would say “Who would want you? Skinny, full of scars and excess skin, you are not even a woman anymore. I’m the only person who would put up with you” and I believed him. I had no self confidence – I believed I was ugly and worthless, and I was actually more scared of being alone, than being with him.

Why did I stay? It’s a question I’ve asked myself thousands of times. I have always been a strong and independent woman; how could I let myself be controlled and abused by a man? I felt pathetic, weak and a failure. Why didn’t I stand up for myself and say; “NO! this is not acceptable”. Why did I make excuses for him? Why did I continue to forgive him when he caused me so much pain? I don’t have an answer to these questions and I beat myself up about it for a long time – I blamed myself for being weak. I believe a big part of me staying was my need to ‘heal’ him – I could see he was hurting and I wanted to help. I actually saw my inability to ‘make everything better’ as a personal failing, but the truth is; you can’t help someone who doesn’t want to be helped.

Please don’t ever judge anyone for staying in an abusive relationship, you have no idea what it’s like until it’s your life. You don’t know the reasons why they stay or why they do not feel strong enough to leave. It wasn’t all bad, if it had been I would have left sooner. I loved him and when he wasn’t drunk he could be charming, kind and loving – we did have happy times together.

After 2 years of emotional and physical abuse, I finally found the courage to leave him. The truth is, he admitted to cheating on me and that flipped a switch inside me. Somehow I could justify the abuse but I couldn’t tolerate infidelity. He didn’t take it well: He barricaded us into my flat and refused to let me leave. He threw me around the flat like a rag doll, but I managed to escape. It was the most traumatic night of my life and it was the first time I had truly feared for my life, but I never looked back.

It took me years to recover. The physical bruises and scars soon healed but the psychological damage lasted much longer. Two years of abuse had a huge impact on my mental health; I was depressed, full of anxiety and negative thoughts, and my self esteem was at the lowest it had been at any point in my life. I still believed all the vile things he said to me. I still believed I was ugly, unlovable and worthless. Depression hit, I was an emotional wreck, but thanks to amazing friends and family I slowly began to find myself again.

With the help of antidepressants and counselling, I managed to learn to forgive myself for not being strong enough to leave him sooner, but my anger towards M has never gone away. The anger that someone could destroy my life, could make it a living hell – I cannot forgive him for that.

What started out as small signs of controlling behaviour and jealousy, soon escalated. At the time I didn’t realise it was abuse. I didn’t feel like it was severe enough to warrant me asking for help. He made me think I was overreacting, that a shove here and a grab there wasn’t abuse. Or that a harsh word here or criticism there was typical behaviour, that a bit of aggression was normal in a relationship. But the truth is; If someone loves you they will do anything to make you feel secure and happy, they would be mortified if they caused you the slightest pain.

A few months after I left M, I started a relationship with my now husband. He helped me heal and showed me what true love means. With his support I began the long journey of recovery.

Any form of abuse is wrong! Don’t ever let anyone convince you otherwise. If you are not comfortable with it, if it makes you feel scared, distressed or vulnerable, then it’s wrong. Please know there is help out there if you need it. The damage caused to my mental health lasted many years. I wrongly thought I could change him, that my kindness could heal him if I just stayed long enough, but the longer I stayed the more ‘broken’ I became. Please don’t sacrifice your mental health for the sake of someone else’s, like I did. Take care.