To be or not to be a mother?: a tough decision for someone living with mental ill-health 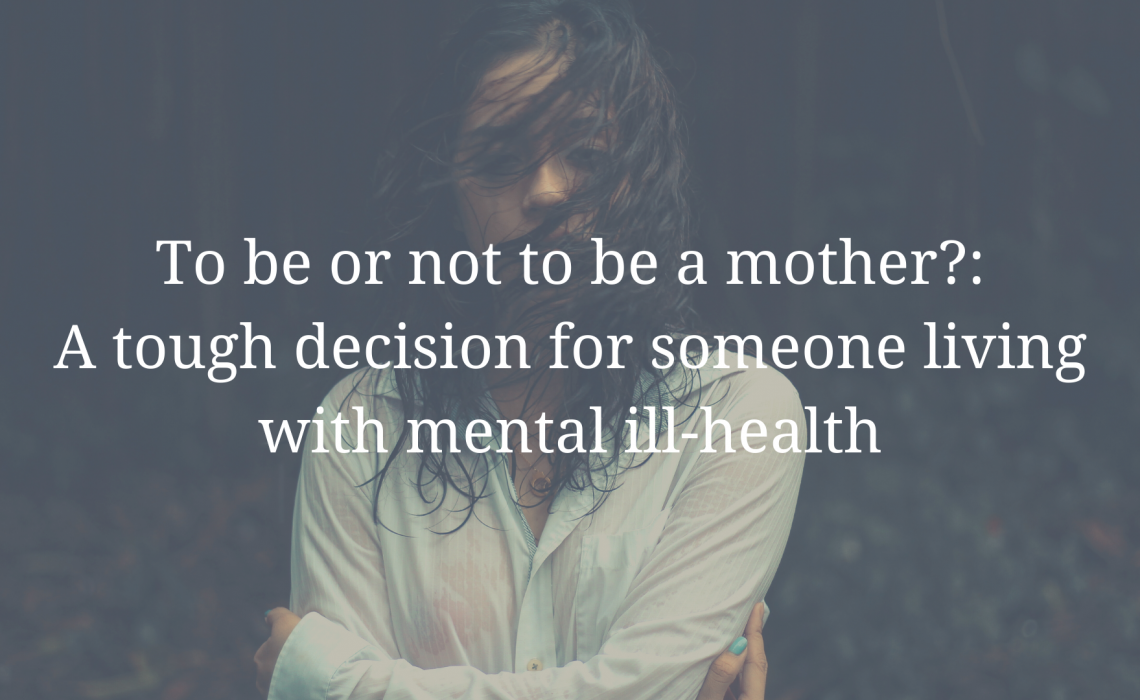 I grew up in a very traditional family. As a young person, one of my “goals” in life was to become a mother. I was so sure about it – I even had names picked out ready. As a young girl especially, it went unquestioned that my path was leading to motherhood. My sister and I were given dolls to push around in tiny prams, and kitchen sets to cook plastic food for our babies. In society, every film you watch, every book you read, paints the picture of the fairy tale life. It’s every girls dream, isn’t It? – to meet your handsome Prince, marry, have a big family and live happily ever after?; To have a little bundle of joy who will love you unconditionally.

I’ve always been a carer, I’ve always been the friend with a constant soggy shoulder because everyone came to me with their problems. I often joke that my empathy dial is turned up to max because I feel everyone else’s pain like it’s my own, and I want to help everyone. I’ve always been ‘Aunty Jo’ to friends’ kids and I love being around children – so it seemed a natural progression that one day I would become a mother myself.

Society paints a picture of the perfect parent. We are programmed from an early age to want to become mothers, and it’s in our DNA. There is so much pressure placed on women by the media, family, friends, and society as a whole to have kids – But what if your anxiety and perceived personal failings convince you otherwise?

I noticed quite early on that I was different to my friends. Anxiety started to surface at a young age. I remember at the age of 7 feeling like the weight of the world was on my shoulders. I was contemplating thoughts and ideas that a seven-year-old should not have even been aware of. Everything scared me, I was fearful of every new situation.

Things only worsened when I hit puberty. Hormones triggered a whole new level of anxiety along with panic attacks, and depression soon took hold as well. Depression dominated my teenage years and my early twenties. Constant thoughts and fears left me with no self worth or confidence – I believed I was worthless, a failure, weak, a burden and unlovable. Suicidal thoughts were rampant, I was exhausted and lacked any motivation.

I knew my mother had her own mental health problems, along with both my grandmothers – who suffered quite severely and spent a number of years in mental institutions. Whether this was something that had been inherited or triggered by life’s traumas, I could never know for sure: so how could I possibly risk passing it on to my child? How could I risk burdening another generation with this kind of torment? Also, what kind of mother would I be? I was consumed by the anxiety and depression I was battling, how could I possibly have the energy and love needed to raise a happy child?

The thought of being responsible for a defenceless, vulnerable child terrified me. What if my actions harmed them? Would I be an unfit mother? What if something bad happened to them? How could I protect them and keep them safe from harm? These thoughts were understandable, in fact they came from personal experience; my older brother died in a road traffic accident when I was 8 years old. I believe this tragic event shaped a lot of my thoughts and fears.

My ultimate decision was; “No, I couldn’t.” There are so many wonderful parents in this world and so many children that are loved beyond anything I could offer. I decided that my desire to have children wasn’t strong enough to risk a lifetime of misery for my child. But also the decision was a selfish one; having a child would have triggered my anxiety to a point of being uncontrollable and unbearable. I had found some peace with my mental ill health at this point, with the help of my partner, and I didn’t want to lose the stability I had gained.

It turned out my husband-to-be didn’t want kids either, although seeing him with his young niece and nephew I know he would have been a great father. I don’t know if he said this to make me feel better about my choice; if he did, then I am forever grateful for his compassion, but ultimately it was a decision we both agreed on.

So did I make the right choice? – I believe I did. Not long after I made this decision my physical health deteriorated too – I developed ME/CFS and Fibromyalgia. There is some evidence to suggest these conditions can be hereditary – in fact my mum was later diagnosed with both too. I struggle to care for myself so I know I wouldn’t have been able to care for a child too.

Do I regret my decision?: There are times, when I see my friends with their children, that I envy the intimate bond they have, but I am now 43 and I have never once regretted my decision. I have close relationships with my friends’ kids and I will continue to relish my role as ‘Aunty Jo’ – I know I can offer more in this capacity than I ever could as a mother. I became a carer at a young age due to my mother’s own mental and physical health problems, I wouldn’t be able to live with the guilt of passing this role onto my child. I often feel like a burden to my husband, this would be multiplied tenfold if it was my child bearing the weight of my care.

Anxiety and depression will always play a role in my life and these have been amplified to a degree by my physical ill-health, but as I get older I am discovering healthier coping mechanisms for dealing with my fears. Not having children has allowed me the freedom to explore treatments and to take the time I desperately needed to concentrate on self healing. Writing brings me great comfort and helps me explore my feelings in a constructive way and this is something I will continue to do.

I know there are many women who desperately want to have children but are physically unable to, who may read this article and see my choice as a selfish one. I feel deeply for these women, and men, who are denied, by no fault if their own, the chance of becoming parents. Yes, my decision was probably a selfish one but I know it was the correct choice for me.

I am not saying that anyone who suffers from mental health issues should avoid having kids, far from it – I know many people who struggle with anxiety and depression themselves who are wonderful parents. I’m just saying that this was the right decision for me, and for us as a couple. Centuries of propaganda tell us we’re created in order to procreate, but the great thing about being human is that you get to make your own choices.

In a society which places so much pressure on women to become mothers, and where childless women are often seen as inferior due to their decision; ultimately the choice to have children is yours and yours alone. We need to start chipping away at the assumption that all girls should want to grow up to be mothers, and instead allow them the space to make their own decisions. You have to decide what’s right for you and not be bullied into conforming to societal stereotypes. Please don’t be afraid to walk your own path.