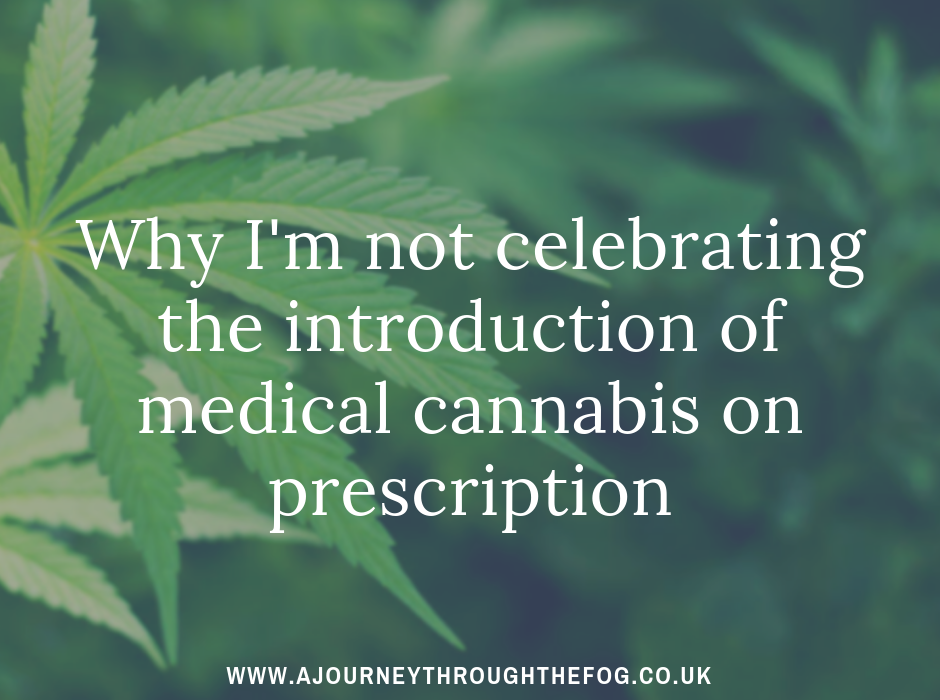 Well, today is the day that cannabis-based medicines theoretically become available on prescription. Although many of us had high hopes (no pun intended) that this step would finally allow thousands of patients across the UK to gain access to cannabis treatment, the reality is – the vast majority of us will not qualify.

It appears that the government’s actions have been designed just to appease us, the public, following a few high profile cases of some very sick children with epilepsy – nothing more. We have tried to remain positive and say “it’s the first step” or “at least it’s a step in the right direction” but sadly I don’t even think this is true anymore.

Let me explain my pessimism and highlight the massive flaws in the government’s approach to introducing medical cannabis.

1. Doctors are already saying that they will not prescribe medical cannabis

As patients approach their doctors about medical cannabis, they are being met with doctors blankly refusing to even consider cannabis as a treatment option.

This is partly due to ignorance and lack of education. Doctors do not want to prescribe something they have not received any training for, and sadly, the endocannabinoid system and cannabinoid therapy are not taught in medical schools.

Also medical cannabis is not yet included in NICE guidelines, which seems to be an excuse used by many doctors.

But unfortunately, doctors personal prejudices are also at play here. The propaganda surrounding cannabis has been rife for years and doctors are just as susceptible to these lies as the rest of us. The lack of knowledge about cannabis can be addressed through education but this will take time. The doctors prejudices over cannabis is sadly something which may take years to overturn.

Initially patients suffering from chronic pain conditions were included in the list of eligible conditions. It was then announced that there would not be any restrictions on the medical conditions eligible, which was positive news. But this criteria has changed yet again.

New NHS guidance for doctors in England says it should be prescribed only when there is clear published evidence of its benefit and other treatment options have been exhausted.

The treatments can only be prescribed in cases of:

As a chronic pain patient, I am angered by this last minute shift.

3. There must be an “exceptional clinical need” for cannabis-based medicine and all other treatment options exhausted

Patients must have exhausted all other treatment options before receiving access to medical cannabis. Doctors will have to prove there is an “exceptional clinical need” and no other medicine would be suitable for their patient. Sadly, for most, this will mean they will not be eligible, and in the very least it will delay cannabis being prescribed for years, along with the suffering and side effects patients endure through most traditional treatment options.

4. The guidelines to clinicians basically amounts to “do not prescribe”

The guidelines to clinicians by NHS England was left until the last minute – it was only released the day before the implementation of this new legislation. The actual guidance is buried within a mountain of bureaucratic doublespeak. Aside from chemotherapy-induced nausea, the guidance amounts to “do not prescribe”. This is extremely disappointing and will contribute further to doctors unwillingness to even look at cannabis as a treatment option.

5. The cost will mean doctors will be dissuaded from prescribing

Pharmaceutical companies are charging huge sums of money for their licenced cannabis-based medicines. I know it costs a lot to gain a licence and many years of trials, but the figures being quoted, for what many see as an inferior product, are ridiculous.

Ultimately this will means doctors will be unwilling, and discouraged from, prescribing something that costs the NHS more money than traditional medication.

To be eligible, cannabis products must be produced and regulated for medicinal use in humans. The development of approved and regulated medicine can cost millions and therefore is only likely to be a viable option for large pharmaceutical companies with the financial backing to carry out the extensive tests and trials needed.

This definition plays into the hands of large pharmaceutical companies who already have approved cannabis-based products including Epidiolex and Sativex, developed and produced by GW Pharmaceuticals.

Unfortunately this limits the options available for patients as large pharmaceutical companies are more focused on isolated cannabinoids and their products are also suspended in alcohol. Single cannabinoid products are seen as far inferior to “whole plant” medicines, and many people are sensitive to alcohol – why mix such a healing substance with alcohol?

I personally cannot take a medicine that is suspended in alcohol. I am intolerant to alcohol and it’s also one of my main pain triggers, and I know I am not alone. It could take years of trials before alternative cannabis-based medicines are licenced and there’s no guarantee they will be “whole plant” or alcohol-free.

The reality is, that although this change in legislation has been passed very quickly, the potential benefits will take years to be felt by the vast majority of patients wishing to access legal medical cannabis.

It does allow for children with severe epilepsy to receive the treatment they desperately need (once they have jumped through MANY hoops), although the “whole plant” cannabis medicine which is successfully taken by epileptic children like Alfie Dingley, will not be available – only less effective isolated cannabinoid treatments.

It appears that the only people who will benefit from the legislation change are pharmaceutical companies and their shareholders, many of whom are politicians and their family members. Am I being cynical? I don’t think so – I’m being realistic. Faced with all the facts, this whole farce seems to be a well orchestrated charade designed to appease the general public – while chronic pain patients like myself are left no better off than before the change in legislation.

So where does this leave patients?

I don’t like writing such a pessimistic post but the reality is we have been promised so much and given very little. I am pleased that children with severe epilepsy will (hopefully) be getting a promising treatment option, but what about the thousands of other patients who would greatly benefit from cannabis treatment?

In reality, cannabis-based medicine will only be prescribed in extreme cases, which was already the case before the new legislation came into force – so nothing has changed.

As a chronic pain patient myself I feel angry and severely let down. I really wanted to try medical cannabis and I believe it’s a far better treatment option for my chronic pain than any prescription medication currently available.

Maybe it’s time for me to explore medical cannabis on my own?