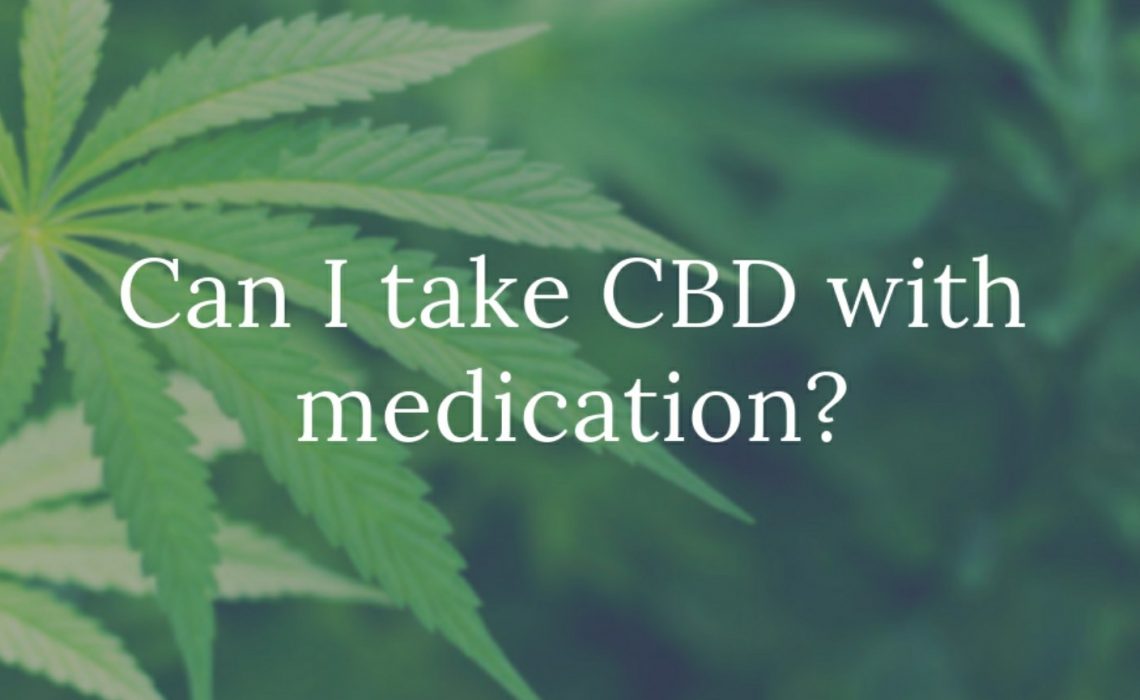 Can I take CBD with my medication? CBD and drug interactions.

Guest post. The following informative article has been written by;

Many people start their CBD journeys for various reasons. In the end we all ask very similar questions. While we try to gain the answers, not everything is black and white.  A very common question asked in people’s journeys is: “Can I take CBD with medication?”. The short answer: yes, with caution.  The long answer? Will be explained in this paper.

It has become well-known that CBD and medical cannabis are becoming more accessible.  There is evidence that the pharmaceutical world is taking note and the promotion of medical cannabis into mainstream medicine is already happening with the approval of new CBD based medicines.  It is following the same approval methods as all other current prescribed medicines, which requires proof of biochemical uniformity and stability along with safety and efficacy as proven by randomized clinical trials.

In easier terms, they are testing it to the limits to prove that it does treat medical conditions and the relief of these conditions are noted in clinical settings where dose is monitored against that of a placebo and significant improvements are noticed.

There must also be practical administration methods which minimizes patient risks.  ‘Street cannabis’ cannot meet regulatory approval due to the variability of each ‘batch’ and the potential harmful chemicals which may reside within the plant such as pesticide residuals, heavy metals or even mould or bacteria.  This is why all batches must reach regulatory approval with consistent lab results from approved testing laboratories [2].

Cannabis inhalation, by either smoking or vaping, presents a rapid peak in serum and brain concentrations of cannabinoids but also presents risks to the patient as studies have shown smoking/vaping may still cause pulmonary harm [2].

Oromucosal oils are beneficial when they are used sublingually as they avoid the ‘first pass’ metabolism of the liver, allowing more to reach the endocannabinoid system before it is metabolized.  During the pass through the liver, a large proportion of the CBD is excreted, unchanged, in faeces [9]. Other delivery methods such as transdermal patches and rectal suppositories are not showing promise in late stage clinical trials (human trials) [2].

Drug interactions happen when two or more substances with similar (or different) actions are co-administered.  This is common with medications such as Warfarin and aspirin or cyclosporine and St. John’s Wort.

These interactions can be synergistic, meaning they enhance the effects of one or both drugs when administered together (e.g. 1+1>2).

Antagonistic, they reduce the effect of one or both drugs when administered together (e.g. 1+1<2).

Or they can be additive, where they produce an increased effect when administered together but no greater than when they administered alone (e.g. 1+1=2).

Drug interactions can also be affected by many other factors such as disease, patient metabolism, and the nature of the compounds in the drugs/medication [1].

As CBD is hepatically metabolized, the potential exists for pharmacokinetic drug interactions via inhibition or induction of enzymes or transporters [6].  Pharmacodynamic interactions may occur if cannabis is administered with other central nervous systems (CNS) depressant drugs, and cardiac toxicity may occur via additive hypertension and tachycardia [6].

Pharmacokinetic interactions usually occur when there are alterations to the drugs’ absorption, distribution, metabolism and excretion (ADME) pathway.  Most drug-drug interactions are pharmacokinetic. This is where CBD can affect the metabolism of the other medications which are used, especially if they utilize the cytochrome P450 (CYP450) enzymes.

CBD and the CYP450 enzymes

The CYP450 enzymes can only work on one substance at one time.  This is usually prioritized by the liver, depending on the type of substance some take priority over others.  CBD is an antagonist to these enzymes meaning that it is ‘prioritized’ before most substances. A result of this antagonism it blocks anything else from using that enzyme until it is cleared.  Due to the current lack of research it is not possible to definitively say that CBD is prioritized over all medications. There is simply not enough evidence [1].

A cautionary advice when looking at CBD interactions is that there aren’t many quality studies performed as yet and the few that there are all have small sample sizes.  This means that the results many need to be taken with a pinch of salt [5].

While primarily being researched is as an anticonvulsant, CBD is showing promising signs [5].  Through this research it has been found that there are interactions with medications. In clinical trails with children with severe epilepsy, there were increases in levels of topiramate, rufinamide, N-desmethylclobazam, zonisamide, and eslicarbazepine, with a decrease in levels of Clobazam serum levels while administering with CBD, which changed proportionately with CBD dose.  With the exception of N-desmethylclobazam and Clobazam all drug level changes remained within normal acceptable limits.

Sedation levels were observably increased in N-desmethylclobazam and Clobazam [3], resulting in a dose reduction of Clobazam [5].  Aspartate aminotransferase (AST)/Alanine aminotransferase (ALT) levels were significantly higher in patients taking concomitant valproate.  Abnormal liver function test (LFT) results were noted in patients taking valproate. This emphasizes the need and importance of monitoring serum levels of antiepileptic drugs (AED) and LFTs during treatment with CBD in conjunction with AEDs [7].  This is a specific look at AEDs, but there have been other drug interactions observed.

The absence of interaction between CBD from oromucosal cannabis extract and omeprazole suggests there is a less significant role of the CYP2C19 enzyme (a branch of the CYP450 pathway) in CBD metabolism.  There is a general low risk of clinically significant drug interactions with most use but individual specific human data is lacking [4].

There has been early reports and case studies which indicate that there are also potential drug interactions with Warfarin, oxymorphone, pentobarbital, cocaine, sympathomimetic amines, and disulfiram but it is agreed that further research is required to conclude the true effect the interactions [1].

Current data regarding interactions between CBD and other pharmaceuticals are primarily limited to anti-seizure drugs.  In a case study of using CBD in epilepsy, a 44-year-old male had been taking 400 mg lamotrigine, 1500 mg levetiracetam 2 times a day and 7.5 mg warfarin once per day.  His International Normalized Ratio (INR) had been stable for at least 6 months prior to taking CBD with levels ranging from 2.0–2.6. Initial CBD dose was started at 5 mg/kg/day divided into two separate doses.  Dose was increased by 5/mg/kg/day CBD once every 2 weeks, an increase in the observed INR was also noted. This resulted in having to adjust the Warfarin dose to maintain an INR within therapeutic ranges. It was noted that the patient found therapeutic dose at 35 mg/kg/day CBD and was able to reduce his warfarin dose to 5.36 mg per day keeping his INR between 1.96 and 2.9, averaging an INR of 2.52. [8]

Warfarin is a prime example of an oral anticoagulant which is metabolized by the CYP450 enzyme complex.  Due to warfarin’s narrow therapeutic index, frequent monitoring of patient INR is required and achieve and maintain appropriate anticoagulant effects.  In addition of CBD competing with warfarin for using the CYP450 pathway, it is shown to act as an inhibitor towards it which impairs the degradation of warfarin resulting in the increase in blood plasma levels and a higher INR.  This finding suggests an interaction between CBD and other drugs besides AEDs, particularly those which utilize the CYP450 enzymes [8].

It is also cautioned when using any of the benzodiazepine family and valproic acid as these may interfere, yet the full nature of their interaction has not been fully explored [3].  Plasma levels of CBD were noted to be increased when CBD was administered with food or in a fed state (within 30 minutes before or after meal). It has been noticed in a clinical pharmacokinetic trial the interaction between a CBD/THC spray (sativex) combined with either rifampicin, ketoconazole or omeprazole that CBD was well tolerated in conjunction with these known users of the CYP450 enzymes.  Caution should, however, be used when co-administering drugs which utilize the CYP3A4 enzyme and the CYP2C19 enzyme [5] of the CYP450 pathway.

It has been observed that vaporized cannabis increased the pain relieving effects of opioid based drugs without altering plasma opioid levels.  It was also noted in a study of 274 people that there was a reduction of the consumption of opioids when using vaporize cannabis [1]. This allows for a reduction in highly addictive prescription medication while potentially providing similar levels of pain relief.

The limited availability of pharmacokinetic and pharmacodynamic information highlights the need to initiate using a low and slow approach, carefully observing for desired and adverse effects [6].  CBD tolerance can depend on prior experience with cannabis and the underlying endocannabinoid system. The recommendation to start low and slow sees therapeutic CBD doses observed at between 10-100 mg per day.  Dose should begin at modest levels and titration upwards until therapeutic effect is reached. This may change with the activation of endocannabinoid system and dose may need altered [2].

The main issue for most regarding CBD self administration is the lack of regulation within the oils which can be bought on ‘the high street’.  Short of a biochemical analysis by a certified laboratory using verified phytocannabinoid standards, the buyer/consumer has no idea what they are purchasing and putting into their bodies.  These could be filled with dangerous chemicals just like ‘street cannabis’ [3].

It is believed that the full cannabinoid and terpenoid profile should be analysed to make appropriate and informed decisions by the consumers in both medical and public markets.  Current naming of strains such as ‘sativa’ or ‘indica’ is scientifically unjustified. What is more necessary than these ‘strains’ (used loosely) is the complete data on the cannabinoid and terpenoid profiles [3].

In conclusion, it can safely be said that as long as the low and slow method of CBD administration is followed, the desired effects can be monitored more closely.  In doing this along with taking medication it should allow for successful CBD use. This does not mean to say that it is safe to take medications alongside CBD, caution should still be advised.  It is also worth pointing out that CBD, in any form and administration method, will have its own individual effects on the body and should all be monitored. Always consult a GP/pharmacist regarding medications you are unsure of, and leave a gap between CBD and medications to be safe.