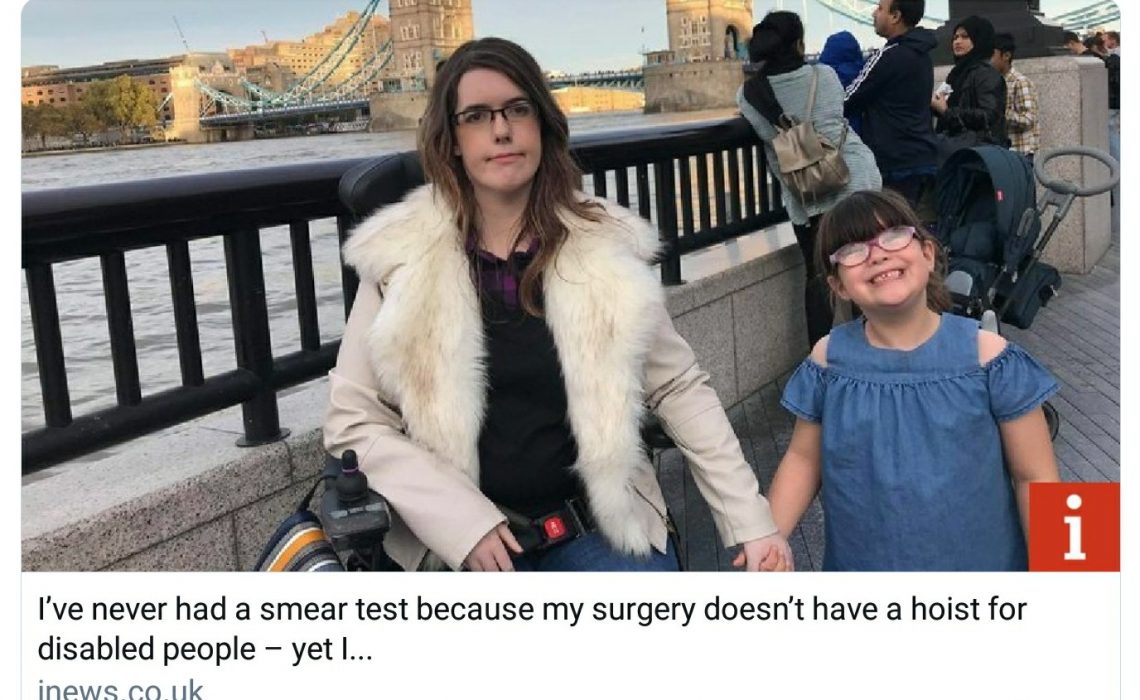 The following article was written by Helena Vesty and was published in the Independent online on the 23rd May 2019. Please click here to read the original article.

Fiona Anderson is one of a number of women who are disabled and have never been able to access cervical screenings.

Women with disabilities across the UK say they are being forced to miss life-saving cervical cancer screenings.

Women who are physically disabled say they have had to go without a cervical screening for years because GP surgeries do not have hoists, which are essential for a safe transfer to an examination table for a screening.

Women with disabilities are also reporting being denied screenings at home or in hospital and being told by medical professionals that other options including referrals and home visits, which are allowed under local NHS services’ guidance, cannot be accommodated.

‘They are not willing to refer me to a place that might have a hoist because I have no previous record of pre-cancerous cells, but that’s because I’ve never had a scan’ – Fiona Anderson

A campaign for equal access to screenings was launched in January after an online petition gained the support of more than 100,000 people in just one month. The petition calls on the NHS to install hoists in all medical centres, and has prompted research into the experiences of cervical screenings for women with disabilities for the first time.

The petition was started by 30-year-old Fiona Anderson, who has muscular dystrophy and lives in Bolton. She says she has never had a cervical screening because her surgery does not have a hoist. After seeing her father die from cancer, the reality of not being able to get checked is a constant source of anxiety for Ms Anderson.

Fiona Anderson: ‘They are not willing to refer me to a place that might have a hoist because I have no previous record of pre-cancerous cells, but that’s because I’ve never had a scan’

Fiona Anderson: ‘They are not willing to refer me to a place that might have a hoist because I have no previous record of pre-cancerous cells, but that’s because I’ve never had a scan’

She told i: “My current surgery doesn’t have a hoist, my last surgery didn’t have a hoist. As far as getting a cervical screening is concerned, as a mum-of-two, it’s something I wanted to have.”

Ms Anderson, a full-time muscular dystrophy campaigner, says she has not been able to secure a referral to a hospital, having been told by surgery staff she needs a prior screening result to be referred – an impossibility without a hoist.

“They are not willing to refer me to a place that might have a hoist because I have no previous record of pre-cancerous cells, but that’s because I’ve never had a scan. I run the risk of cervical cancer going undetected purely because of an accessibility issue related to my disability.”

“I still receive letters reminding me my smear test is overdue and that by skipping it I’m risking my life,” she added.

Around 17 per cent of all women in the UK aged 12 to 50 have a disability, according to disability charity Scope, but there are no exact figures of just how many women are affected by screening accessibility. There are approximately 260,000 people in the country who need the use of a hoist to access a public toilet, according to Changing Places UK. This means the same number would most likely need a hoist to access a medical examination bed.

‘I was told it couldn’t be done at home’

Jo Moss, 44, says she has had many doctors appointments at home but was told a screening could not be done there.

Jo Moss, 44, says she has had many doctors appointments at home but was told a screening could not be done there.

Since becoming housebound with ME/CFS over seven years ago, Jo Moss, 44, says she has had many doctors appointments at home but was told a screening could not be done there.

Ms Moss, from Norwich, told i: “When my reminder came through I rang my doctor straight away to make an appointment. I was told that it couldn’t be done at home, and I wasn’t given any other options.

“I left it for three or fours years and then when Fiona put her petition on Twitter, I contacted my GP again, first by phone, then by letter and another letter and I got the same brush off.”

Ms Moss says the GP wrote back, saying a normal bed was too soft for a screening and the test needed to be done on an examination table. She also says the GP cited a lack of an adjustable light as a reason for a home screening being impossible.

When asked why Ms Moss would be refused a cervical screening at home, a spokesperson for NHS Norwich Clinical Commissioning Group (CCG) said: “We would advise anyone who is eligible for a health screening but is not able to arrange this with their GP practice because they cannot leave their house to contact their local NHS Clinical Commissioning Group who will endeavour to make appropriate arrangements.”

Ms Moss says in her second and most recent letter, she explained to the GP she had an adjustable hospital bed to have the screening on and even asked if a friend, a nurse at a different surgery, could do the test.

“All of those things seemed to change my GP’s mind. A couple of days later I got a call from the practice nurse saying she wanted to book an appointment to do my smear test at home.

The nurse made the appointment with Ms Moss and she was able to have a screening at home. Ms Moss used the hospital bed in her home for the screening and the nurse wore a head torch.

Ms Moss added: “It was quite frustrating that it turned out to be so straightforward after being told it couldn’t be done at home.”

‘I’ve never been able to have a screening’

Michela Hollywood: “When I asked for a screening, my doctor said, ‘are you sure you want to have a smear?’

Michaela Hollywood: “When I asked for a screening, my doctor said, ‘are you sure you want to have a smear?’

Michaela Hollywood, from County Down in Northern Ireland, should have had the test when she turned 25. Now 28, she says she has not yet been able to have a preventative screening because of a lack of hoist, despite her spinal muscular atrophy making her more prone to reproductive infections.

Ms Hollywood said: “When I asked for a screening, my doctor said, ‘are you sure you want to have a smear?’ When I went to the gynaecologist for something different, he said he wouldn’t give me a screening because I hadn’t been sexually active.

Dr Tracy Owen, Consultant in Public Health Medicine with Northern Ireland’s Public Health Agency, said: “The chance of cervical cancer in someone who has never had sexual intercourse is very low, but if someone participates in other sexual activity which exposes them to potential transmission of the Human Papilloma Virus, their risk may increase. For that reason, they are advised to discuss their need for screening with their doctor or nurse. While we can’t comment on this specific case, it is not unreasonable that a patient under certain circumstances may be advised that a cervical screening test is not required as the patient’s individual risk of cervical cancer is very low.”

Ms Hollywood believes a stretched health service might be to blame: “I know the NHS is under pressure and I value the NHS for what it does, but that doesn’t mean that disabled women should be missing out on what is a really important screening.”

‘A postcode lottery for women’

The petition has inspired other women to share their stories of being forgotten by the screening system. Once the responses revealed Ms Anderson’s case was far from isolated, research into physically disabled people’s experiences of cervical screenings began and is the first of its kind. Two national charities, Jo’s Cervical Cancer Trust and Muscular Dystrophy UK, are now conducting surveys asking women to share the issues they have had accessing screenings.

Those behind the research at Jo’s Cervical Cancer Trust say they have also not been able to find any national guidance for women with physical disabilities seeking screenings. Instead, they have uncovered “a postcode lottery in terms of the opportunities afforded to women”.

Robert Music, Chief Executive of Jo’s Cervical Cancer Trust, said: “There has been very little research done about these until now and we have uncovered numerous issues ranging from a lack of wheelchair access at some GP surgeries, patchy provision of home visits or hoists and sadly misconceptions around the sexual health of women with physical disabilities.

“It’s not acceptable that there are such inequalities in accessing this potentially life-saving test. We hope our report can give some much-needed insight and guidance on what needs to be done to make this test more accessible for these women including the increased availability of provisions and alternative arrangements as well as innovative changes to the current screening programme.”

One such alternative supported by the charity is self-sampling, where women use a home kit instead to test for HPV, which causes 99.7 per cent of cervical cancers.

Jo’s Cervical Cancer Trust says the option for women to do the tests themselves in the privacy of their own home would be an important one for those who are physically disabled.

HPV self-sampling comes in the form of a swab, such as a long cotton bud or soft brush. Patients take a sample from the vagina and post it to the laboratory.

Other countries, including Australia and Denmark, have already made the move to self-testing. The UK is due to start a six month pilot for self-sampling in September of this year in selected areas of the country, but a full rollout of the scheme may not be seen for some time.

The charity is collecting responses from people with disabilities online now. A full report featuring the responses of hundreds of women is due to be released next month.

In response to questions about disabled women’s struggle to secure cervical screenings, an NHS England spokesperson said: “As set out in the Long Term Plan, the NHS is taking action to do more for people with a disability, including rapidly expanding the number of people getting health checks every year.

“As we increase access to care across the country, local NHS services will need to do more to increase screening of all underserved groups in their own community.”

The spokesperson added: “It is important people can tell their doctor about their disability so they receive extra support but crucially, local NHS services should be making adjustments so women with a disability can easily be screened.”

A spokesperson for NHS Bolton CCG said the lack of hoists across surgeries could be a result of a number of reasons, including the size of the practice.

The spokesperson said: “All our GPs are made aware of the process of referring people with complex needs. Gynaecology wards and women’s health care wards say they do receive referrals from GPs. They are equipped to receive women with disabilities. We would always prefer for the patient to be in a facility but the government guidance says that domiciliary visits can be arranged.”