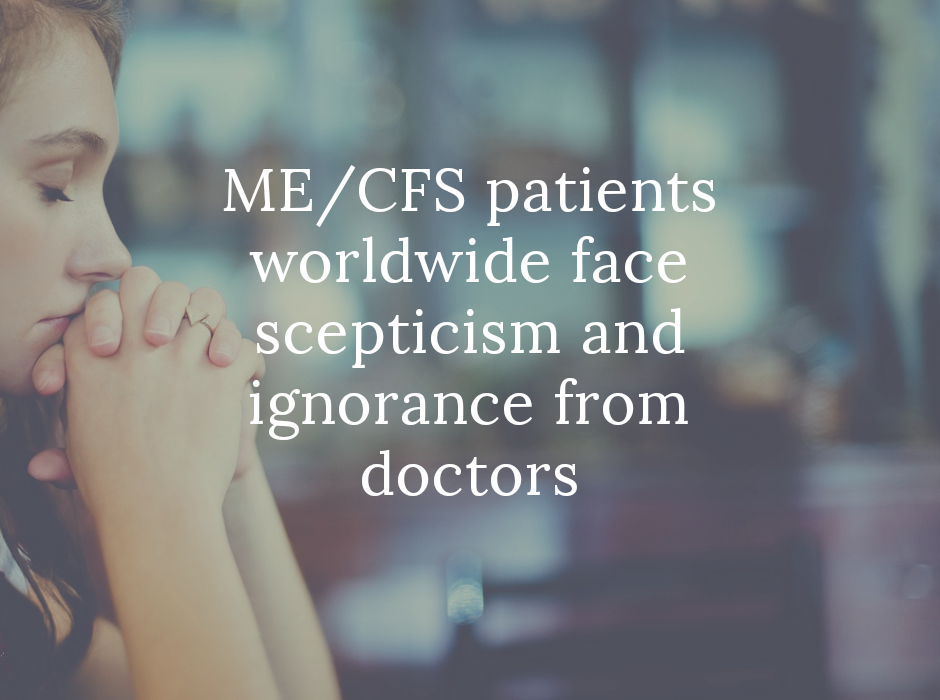 I would like to take the opportunity, for ME awareness month, to talk about the problems ME/CFS patients like myself face getting a diagnosis, and also the general ignorance surrounding ME/CFS within the medical profession. I know not all doctors are bad, but sadly we have all faced indifference and dismissal, or damaging medical advice at some part in our ME/CFS journey.

I personally suffered physical symptoms for years before being diagnosed and I know I am not alone. Evidence suggests that the sooner we get a diagnosis and correct treatment advice, the better chance we have of making a good recovery. But my personal experience, and that of many ME/CFS sufferers I have spoken to, paints a depressing picture. Not only are our symptoms dismissed by doctors, sometimes for years, but even after diagnosis we face scepticism, ignorance and dangerous treatment practices. This neglect is causing us harm. This has to change.

It still baffles me how some medical professionals can completely disregard a serious condition that has been recognised by the The World Health Organisation (WHO) as a neurological disorder since 1969.

With the huge amount of evidence available from a multitude of studies, isn’t it about time doctors were educated about ME/CFS and the seriousness of this illness?

So, I wanted to use this post to highlight the neglect and lack of education surrounding ME/CFS by detailing my own experiences with doctors over the years. I have included some of the direct comments I have received, which may sound shocking to some but all too familiar to others.

First up, a little bit about me:

I was diagnosed with ME/CFS in 2006 but I had been ill for many years before that. Initially I was still mobile although ME/CFS had a huge detrimental impact on my life, but after years of bad treatment advice and my own ignorance surrounding the condition, my health continued to deteriorate.

I now have a severe form of ME/CFS which means I am confined to my bed due to severe fatigue, weakness and chronic pain, and I rely on carers and my husband for most things. There isn’t any aspect of my life that hasn’t been affected. I’m naturally a very sociable person, but I now live in isolation because interactions make me so ill.

My personal experiences with doctors

What I would like people, including doctors, to understand is; ME/CFS is a severe, complex and devastating neurological (not psychological) disease that affects every part of my body. I am in constant pain and feeling exhausted is my ‘normal’.

I have come in contact with many doctors over the years, both before diagnosis and after. Although a couple were both sympathetic and knowledgeable, the majority were dismissive, and uninformed about the disease I am living with.

Before being diagnosed with ME/CFS, my physical symptoms were dismissed for years as anxiety and depression, by numerous GPs. Doctors just kept prescribing antidepressants. Unsurprisingly they didn’t help, in fact the side effects made me a lot worse. No matter how many times I explained my physical symptoms, I was faced with the same incorrect diagnosis. Even after diagnosis I faced the same disbelief.

And the doctors that didn’t dismiss ME/CFS as “all in my head” were uneducated about the condition and how devastating it can be. They didn’t have a clue what to do with me, so they did nothing. Lack of education is a huge problem. Treatment options are limited to trying to manage the symptoms, but most doctors are unaware of the options available.

This problem is made worse when I have treatment for non ME/CFS related medical issues. Last year I was admitted to hospital with heart problems and the treatment from some doctors, and nurses, with regards to my ME/CFS symptoms was frustrating and damaging. They couldn’t fathom how a healthy looking 40 something couldn’t stand up or walk around the ward. And no matter how often I mentioned how hypersensitive I am to light and noise, and the pain it causes, this was not taken into account. One nurse tried to force me to sit up while she made my bed – even though I repeatedly told her I couldn’t.

I was under the supervision of an ME/CFS clinic when I was first diagnosed but I never saw a doctor, and I was just taught pacing. The depressing truth is; There is currently no specialist care services in my region for moderate to severely affected ME/CFS patients. I have been bed bound now for over 6 years, yet I have had no specialist medical supervision during this time. I am in constant pain and I rely on carers and my husband for most things – yet I get no treatment or guidance from any doctors. It’s very hard to be optimistic about my future.

Here are a few of the comments I have received from doctors about ME/CFS. There are many more I could include. Do any of these sound familiar? Have you received similar upsetting comments from doctors?

The following was said to me over the phone, by my GP after I was diagnosed with severe osteoporosis in my spine; “If you don’t get out of bed, you are going to die in that bed, sooner rather than later.” She insinuated that being confined to my bed was my choice rather than due to the debilitating symptoms of ME/CFS.

Another doctor exclaimed; “Good news – you don’t have ME. You have PTSD” . This was after I already had an ME/CFS diagnosis from a specialist clinic.

One doctor told me to “sign up to a pilates class.” This was at a time when I was struggling to even sit up, let alone exercise.

Another doctor was extremely open about his scepticism, stating; “I don’t believe in ME – it doesn’t exist”

I was also told by one doctor that I was “sleeping too much” and this was causing my fatigue – not ME/CFS.

Education is desperately needed along with funding for biomedical research. Although there is a huge amount of evidence available from a multitude of studies, proving that ME/CFS is a neurological condition, there are still so many medical professionals who believe it’s a mental disorder. Until a definitive test is established that confirms a diagnosis of ME/CFS, I fear this attitude will continue.

Finding a doctor that is both supportive and knowledgeable about ME/CFS, especially at the beginning of this illness, can mean the difference between a good recovery or years of worsening symptoms. Doctors attitudes and actions have the potential to change lives.

ME/CFS is not rare. It affects an estimated 15-30 million people worldwide (although this number could be as high as 65 million), yet there has been minimal funding for biomedical research, and very little is taught about it in medical schools. With so many people affected by this disease isn’t about time research and education became a priority? All we, the ME/CFS community, want is fair treatment and a chance for a future.

What dismissive comments have you received from doctors about your chronic illness?