The Health Benefits of Terpenes 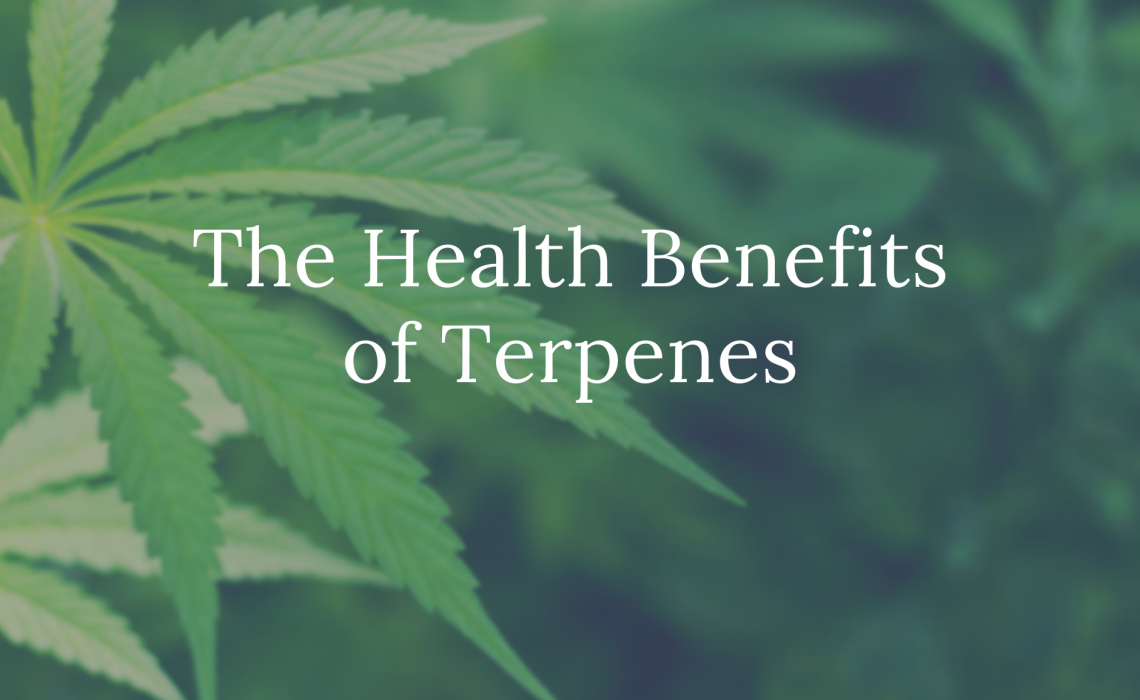 In part one of my guide to terpenes, What are terpenes? Cannabis compounds explained, I introduced you to the fascinating world of terpenes. I discussed how terpenes can amplify the beneficial effects of other compounds found in cannabis, creating what is called the “entourage effect”. And I also highlighted how terpenes interact with our native endocannabinoid system (ECS).

In this post I will delve deeper into this subject, examining a few common terpenes in more detail, and discussing their medicinal properties.

The medicinal properties of terpenes

As I have already discussed, there are more than 20,000 terpenes in existence. While over 100 different terpenes are produced by the cannabis plant in varying concentrations, there are a few which appear more commonly and in greater concentrations.

As terpenes are produced by most plants, their potential therapeutic properties have been of great interest for thousands of years, and a wide variety of terpenes’ properties are supported by numerous in vitro, animal and clinical trials.

Many studies have been carried out on these natural compounds over the years, which show a myriad of health benefits can be gained from each. Alongside full spectrum CBD extract, these natural ingredients can boost the benefits you receive.

To understand why terpenes matter, you need to understand a bit more about how they work. So, let’s take a look at some of the most common terpenes and their therapeutic properties.

Myrcene is the most abundant terpene in cannabis. In fact, a study in Switzerland revealed myrcene composes up to 50 percent of the terpene content in the cannabis plant. The aroma offers an earthy, fruity scent, and the taste offers a mango with hints of mint experience. Myrcene is also plentiful in mango, hops, eucalyptus, thyme, and lemongrass.

Myrcene has a number of therapeutic properties:

They used plants from different countries, like the Mexican Yerba porosa [1] and Korean mountain magnolia [2], both of which contain high doses of myrcene, to test for anti-inflammatory properties.

Scientists administered yerba porosa orally to mice with inflammation in the lung lining (also known as pleurisy). The results showed [3] myrcene inhibited the inflammation and slowed the production of nitrogen oxide (NO) and other interferons normally produced during lung inflammation.

Oil from Korean mountain magnolia [4], which contains 12.72% myrcene, was also capable of inhibiting nitrogen oxide (NO) production induced by endotoxins as a signal of inflammation. This suggests myrcene plays a role in the oil’s anti-inflammatory activity.

Myrcene also has properties capable of increasing your sleep and relaxing muscles. In a study [7] performed on mice, myrcene increased sleep duration by around 2.6 times. It’s sedative and relaxing effects [8] also make it a viable treatment option for insomnia and pain.

Pinene is one of the most common terpenes in the world (not just cannabis). In fact, there are actually two types of pinene – alpha and beta. Alpha-pinene is found in pine trees and is responsible for the plant’s signature scent. It also happens to be the dominant pinene in cannabis.

Beyond scent, pinene provides a number of therapeutic qualities.

A study from Northeast Forestry University [9] in China found that pinene possesses potent anti-microbial qualities. The researchers concluded the terpene is so effective at treating bacterial and viral infections, pinene could even be used for bronchitis – a condition that is typically difficult to treat due to a resistance of antibiotics.

Some studies [10] suggest pinene even has the ability to kill MRSA (methicillin-resistant Staphylococcus aureus) infections. This would be great considering that very few antibiotics on the market today are capable of this.

Pinene is also used in medicine as an anti-inflammatory [11] and a bronchodilator [12], a drug that relaxes bronchial muscle resulting in expansion of the bronchial air passages. An example of this would be an inhaler used to treat asthma.

Caryophyllene is a sesquiterpene found in many plants such as Thai basils, cloves, cinnamon leaves and black pepper, and in minor quantities in lavender. It’s aroma has been described as peppery, woody and/or spicy.

The Horváth et al study [13] suggests beta-caryophyllene, through a CB2 receptor dependent pathway, may be an excellent therapeutic agent to prevent nephrotoxicity (poisonous effect on the kidneys) caused by anti-cancer chemotherapy drugs such as cisplatin.

The Jeena, Liju et al study [14] investigated the chemical composition of essential oil isolated from black pepper, of which caryophyllene is a main constituent, and studied its pharmacological properties. Black pepper oil was found to possess antioxidant, anti-inflammatory and antinociceptive properties.

Limonene is another abundant terpene both in cannabis and other plants. It offers a fresh, sweet aroma with a hint of citrus. It’s been shown to have sedative and motor relaxant effects, and also has antioxidant and antibacterial properties.

Myrcene is not the only terpene to make you sleepy. A study showed [15] citral and limonene also presented sedative and motor relaxant effects

Limonene is also a promising lipid-lowering agent [16], which means it can help lower both triglyceride levels and cholesterol levels. And also an antioxidant [17] and anti-inflammatory [18] agent.

Limonene helps prevent build-up of fat that results in a fatty liver while also preventing insulin resistance [19] (pre-diabetes and diabetes).

Interestingly, limonene improves absorption of other terpenes and chemicals through the skin, which makes it great in tinctures, ointments, and other topicals.

Linalool has been used in aromatherapy for thousands of years. While best known for giving lavender its distinct scent, linalool is also present in cannabis varieties. The flavour is lemony with hints of coriander, lavender, and rose. This terpene produces a variety of effects and is most widely recognised for reducing stress.

A recent study [20] involving lab rats demonstrates linalool’s anti-stress effects. During the course of the study, the rats inhaled linalool while being exposed to stressful conditions. The researchers found that linalool actually helped return the rat’s stress levels to normal. Results of reduced stress-expression in both blood profiles and genes suggests a healthier immune system better prepared to fight infection and disease, as well.

Linalool also has sedative effects. People tend to use lavender essential oils to help them sleep, as studies show it increases slow-wave sleep. This is instrumental in muscle relaxation and heart rate reduction. In a study [21] researchers found simply sniffing lavender oil before bed increased sleep quality and increased their energy the morning after. Peanut stems and leaves also have high concentrations of linalool, and studies suggest [22] this terpene is one of the main components responsible for producing sedative effects.

Humulene is a very common terpene in nature. It is responsible for the distinct bouquets and flavours of a number of well-known herbs and products. Beer would not be beer without the hoppy taste that humulene gives to the hop plant.

Humulene has been shown to have anti-cancer and anti-inflammatory properties.

The most recent studies [23] concluded that humulene was as effective of an anti-inflammatory [24] as the steroidal drug dexamethasone.

A 2003 study [25] showed that humulene, especially when acting in concert with other terpenes and cannabinoids, killed cancer cells. The study tested the effects of humulene in several tumor cell lines. The findings revealed that humulene has the ability to produce ROS (reactive oxygen species), which oxidises cancer cells and slows their growth through apoptosis. Subsequent research studies also confirmed these effects of humulene.

In fact, one study revealed that when beta-caryophyllene [26] (another terpene found in cannabis as well as black pepper) is present with humulene, the anti-cancer properties of humulene are exacerbated. Some studies suggest by up to 50 percent.

Also, In small quantities [27] humulene has been shown to kill the S.aureus bacteria.

Terpinolene is a common component of sage and rosemary and is found in the oil derived from Monterey cypress. Its largest use is in soaps and perfumes. Terpinolene is known to have a piney aroma with slight herbal and floral nuances.

Terpinolene has been found to be a central nervous system depressant [28] used to induce drowsiness or sleep or to reduce psychological excitement or anxiety. Further, terpinolene was found to markedly reduce the protein expression of AKT1 in K562 cells and inhibited cell [29] proliferation involved in a variety of human cancers.

Camphene, a plant-derived monoterpene, emits pungent odors of damp woodlands and fir needles. It is a minor component of many essential oils such as turpentine, camphor oil, citronella oil and ginger oil. It is used as a food additive for flavouring, and also used in the preparation of fragrances.

Latest research shows that camphene is particularly significant in its ability to lower cholesterol levels and triglycerides in the blood, therefore reducing the risk for heart disease.

A study published in 2011 [30] was able to demonstrate camphene’s ability to reduce cholesterol and triglyceride levels, the two main causes for heart disease, including stroke and heart attack. The researchers concluded that camphene could be an effective “alternative lipid lowering agent and merits further evaluation”.

Given the importance that the control of hyperlipidemia plays in heart disease, the results of this study provide insight into to how camphene might be used as an alternative to pharmaceutical lipid lowering agents which are proven to cause intestinal problems, liver damage and muscle inflammation.

As you can see, terpenes are quite incredible compounds that offer many health benefits. They not only add to the aroma and taste of many plants, including cannabis, but they also interact synergistically with other compounds to create what is called the entourage effect. Terpenes positively influence our endocannabinoid system (ECS) , a system which plays a vital role in homeostasis or balance within the body.

There is still much to learn about these dynamic compounds, but as science brings us to a greater understanding of their potential applications, their importance in health supplements will continue to grow.

If you would like to find out more about CBD and other cannabinoids, or you have any specific questions you need answering, please head over to my Facebook page CBD Resource Centre