What are Terpenes? Cannabis Compounds Explained 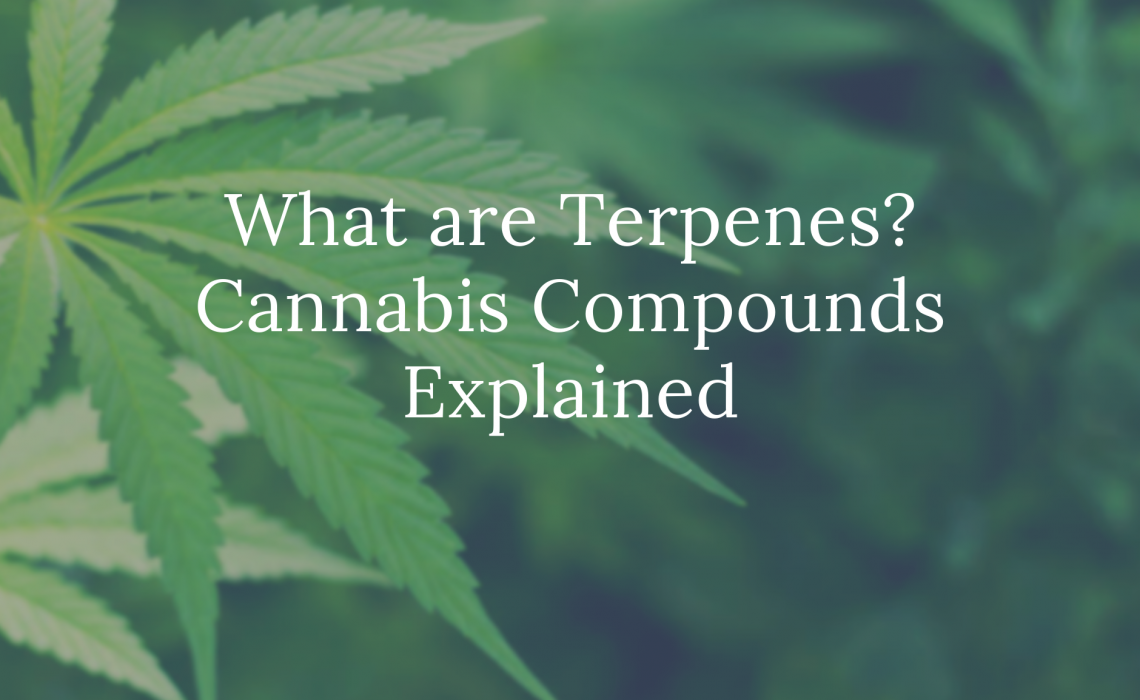 For many people the word “terpene” is a strange and unfamiliar term. But as science and technology carry us to a better understanding of cannabis, we’re beginning to see that there’s a lot more to this healing plant than its cannabinoid content.

In the following article I discuss the many beneficial compounds found in cannabis, and introduce you to the amazing world of terpenes. These special compounds definitely deserve your attention.

An introduction to cannabis

Cannabis is an incredible plant which has been utilised for its therapeutic properties for thousands of years. Although CBD is the cannabis compound that has been receiving the most attention over the past few years, the cannabis plant actually contains hundreds of compounds which all contribute to its potential health benefits.

The cannabis plant produces as many as 400 compounds; cannabinoids, terpenes and flavonoids. There are also many nutritious components in cannabis including an abundance of vitamins and minerals, fibre, essential fatty acids and protein. So cannabis and hemp are great additions to any healthy diet.

What are cannabinoids and flavonoids?

Cannabinoids are a diverse class of chemical compounds that occur naturally in the human body and also in some plants, most notably, cannabis. The cannabis plant produces as many as 113 different cannabinoids. Among these cannabinoids, THC and CBD are the most prevalent and the most well understood, but each cannabinoid has its own specific therapeutic properties.

Flavonoids are the colour-giving nutrients in living things. They’re also one of the largest nutrient families known to scientists at over 6,000 members. Around 20 of these compounds have been identified in the cannabis plant, which is great because they’re also known for their many beneficial properties.

An introduction to terpenes

Now that I have introduced the cannabis plant, I would like to delve into the subject of terpenes. What are terpenes?

Terpenes are fragrant oils that give cannabis its aromatic diversity. These oils are secreted in the flower’s sticky resin glands, the same ones that produce THC, CBD, and other cannabinoids. Terpenes are by no means unique to cannabis; they can be found in many other herbs, fruits, and plants as well.

There are more than 20,000 terpenes in existence and at least 100 produced by the cannabis plant.

At first glance, terpenes are the organic compounds responsible for the wide variety of fragrant flavours and smells in cannabis, but that’s only the beginning. Each terpene has its own therapeutic properties and many of them positively interact with the body’s native endocannabinoid system (ECS). Terpenes also have a synergistic effect with the other compounds in cannabis – they work together to influence the dominant effects of the other cannabinoids, in what is commonly called the “entourage effect”.

Some terpenes are relatively well known for their potential in biomedicine and have been used in traditional medicine for centuries, while others are yet to be studied in detail. Because of the very low toxicity, terpenes are already widely used as food additives and in cosmetic products. Thus, they have been proven safe and well-tolerated.

Terpenes or terpenoids – how do they differ?

You may have heard the term “terpenoid”. The name is very similar to terpenes, but what are terpenoids and how do they differ from terpenes?

Terpenes and terpenoids are definitely related. Terpenes can be considered the natural “on-the-growing-plant” version of terpenoids – which are transformed by drying and curing the cannabis flower. The drying process and conditions change the way the molecules transform (and taste) at the end of the day.

Terpenoids are used constantly outside of cannabis (and outside of plants) for their aromatic qualities: it’s how perfumes, essential oils, and spices are created.

More and more research is indicating that terpenoids also play a significant role in the therapeutic effects of cannabinoids.

Several studies [1] (some from as early as the 1980s) have shown that terpenes work together to help cannabinoids (like THC and CBD) pass through the bloodstream easier and “lower” the blood-to-brain barrier. Basically, you feel more or less of the effects of cannabis based on the terpenes found in it.

Not only that, but because terpenes have their own beneficial effects, when the “whole plant”, including an abundance of cannabinoids and terpenes, is ingested, the benefits are amplified in what is referred to as the “entourage effect”. This means the combined beneficial effect is greater than the individual components. This is why “full spectrum” CBD oils, which are made from the whole plant, are considered more effective, and therefore far superior to isolated CBD oils.

Terpenes and the endocannabinoid system (ECS)

Terpenes have therapeutic effects on the body, not only through their own individual characteristics, but also with the positive way many of them influence our native endocannabinoid system (ECS). Many terpenes have also been found to interact synergistically with cannabinoids by directly or indirectly acting on the cannabinoid receptors.

The endocannabinoid system (ECS), which is found in all mammals, is a network on cannabinoids and receptors. The ECS is tasked with regulating a wide array of the body’s functions like mood, appetite, sleep, hormone production, and even pain, stress and immune system responses. It provides an essential function and helps our bodies reach homeostasis or balance. Like cannabinoids, many terpenes interact with receptors within the ECS and give rise to various effects.

The health benefits of terpenes

Cannabis is an incredibly diverse plant regarding its biological makeup and potential health benefits – and terpenes – are no exception.

A September 2011 report by Dr. Ethan Russo [2] in the British Journal of Pharmacology discussed the wide-ranging therapeutic attributes of terpenes, which are typically lacking in “CBD-only” products.

The report states: “They [terpenes] display unique therapeutic effects that may contribute meaningfully to the entourage effects of cannabis-based medicinal extracts.”

The potential therapeutic properties of terpenes have been of great interest for thousands of years, and a wide variety of terpenes’ properties are supported by numerous in vitro, animal and clinical trials.

An introduction to some of main terpenes found in cannabis

You now have a better understanding about what terpenes are and why they matter. I would now like to introduce you to some of the main terpenes found in cannabis.

Myrcene (earthy, musky, fruity): Myrcene can be found in mangoes, hops, thyme, lemongrass, and basil, and is the most commonly found terpene in cannabis. It can compose up to 50 percent of a cannabis plant’s terpenes.

Pinene (pine): Pinene actually comes in two types: alpha, which smells like pine needles and is the most commonly found terpene in nature, and beta, which smells like rosemary, basil, dill, or parsley. Pinene is also found in conifer trees, citrus peels, and turpentine.

Caryophyllene (peppery, woody, spicy): Caryophyllene is a sesquiterpene found in many plants such as Thai basils, cloves, cinnamon leaves and black pepper, and in minor quantities in lavender. It’s aroma has been described as peppery, woody and/or spicy.

Limonene (citrus): Limonene is another common terpene found in cannabis. Like its name suggests, limonene smells like lemons, oranges, mandarins, limes, and grapefruits. It’s also probably found in your favourite cleaning products or perfumes because of its’ citrusy scent.

Linalool (floral, spicy): Linalool is found in flowers and spices like lavender and coriander. It is a common ingredient in perfumes because of its pleasant floral aroma. It is naturally found in lavender, citrus, mint, cinnamon, and birch.

Humulene (hoppy, earthy): Humulene is found in hops, coriander, cloves, and basil. It is responsible for the distinct bouquets and flavours of a number of well-known herbs and products. Beer would not be beer without the hoppy taste that humulene gives to the hop plant.

Terpinolene (piney, herbal, floral): Terpinolene is a common component of sage and rosemary. Its largest use is in soaps and perfumes. It is also a great insect repellent. Terpinolene is known to have a piney aroma with slight herbal and floral nuances.

Camphene (woodsy, fir needles): Camphene, a plant-derived monoterpene, emits pungent odors of damp woodlands and fir needles. It is a minor component of many essential oils such as turpentine, camphor oil, citronella oil and ginger oil. It is used as a food additive for flavouring, and also used in the preparation of fragrances.

This is just a brief introduction to the main terpenes found in cannabis but I will take a more detailed look at each one, along with their therapeutic properties, in part two: The health benefits of terpenes.

Terpenes are quite amazing compounds which not only enhance the smell and taste of many plants, including cannabis, but also offer many properties beneficial for health – they definitely deserve your attention.

And when taken alongside other cannabis compounds they can amplify the beneficial effects experienced. Terpenes also positively influence our body’s own endocannabinoid system (ECS).

In part two we will learn more about terpenes, and how they play a significant role in the potential medicinal applications of cannabis.

If you would like to find out more about CBD and other cannabinoids, or you have any specific questions you need answering, please head over to my Facebook page CBD Resource Centre