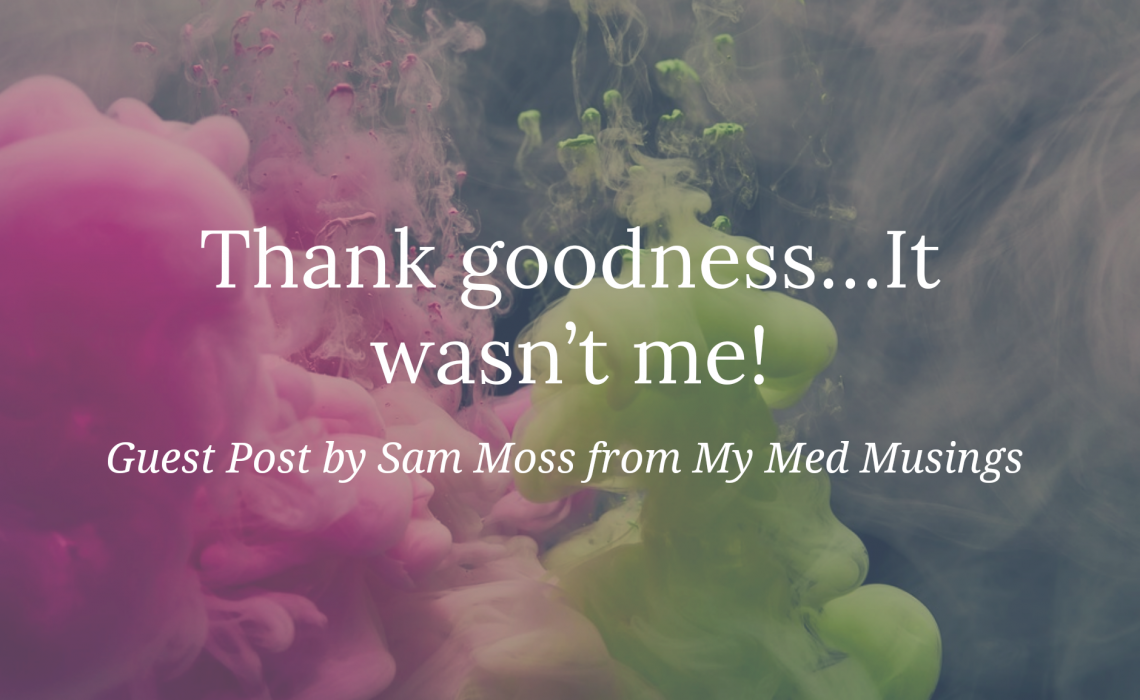 Next up in the ‘Let’s talk about poo‘ series, designed to take the embarrassment out of digestive disorders, is a lighthearted, but educational look at life with a stoma, written by Sam Moss from My Med Musings:

I don’t often write about the ins and outs of living with a stoma but today I’m making an exception.

The life of an Ostomate is in general a mystery to most people. Let’s face it, you don’t usually think about having a stoma or researching what it might be like to have one, unless that particular path is a possibility or if someone close to you has one.

Ignorance and Lack of Understanding

I certainly didn’t give much thought to what it might be like to have a stoma when I had a functioning bowel. Any thought I might have had, was one of “yuk, I wouldn’t want one”. My reaction was of course based on my own ignorance and lack of understanding.

One of the concerns I had when facing the prospect of life with a stoma was whether it would smell. Whether I would smell. It was my biggest fear. Again it was a fear based on a lack of knowledge.

Stoma bags have an inbuilt filter so when an Ostomate passes gas, the smell is filtered and contained. In essence there is no smell, unlike someone without a stoma who accidentally passes gas in public.

Stoma bags are amazing really. There are all kinds to choose from. I have a colostomy which means my output is pretty normal as I still have most of my large intestine. My stoma is on the left side of my abdomen and is a cute red little button. Who knew our intestines were a lovely red color and so clean.

So, back to my bag. I have a one piece bag that literally just sticks onto my skin around my stoma. So easy to put on and dispose of and change. The stoma bag is the same colour as my skin and is so comfortable I’m at the stage where I often forget I even have a stoma. To get to that point takes a while but I’m just over 4 years post my colostomy surgery.

Today, I was however very aware I had a stoma. I had to go for blood tests, I was not feeling wonderful and my stoma was being quite active. I didn’t have a full bag but it was full enough. I didn’t want to be out for too long so was hoping to be seen very quickly.

My husband and I entered the pathology rooms and I was hit by a smell. “Oh no”, I thought, ”I’ve had a leak!”

Leaks can happen but I quickly put my hand on my abdomen and could tell I hadn’t. You learn the signs and everything felt in place and ok.

My next fear was the bag had a hole or tear in it. That has happened before, only twice but once was enough. I wouldn’t be able to tell until I got home or found a toilet.

My legs were playing up so I didn’t have the strength to try and find a toilet and no one else was in the waiting room apart from the phlebotomist, so we just took a seat.

The smell dissipated and I relaxed a little.

We were soon called into the collection room. As my hubby and I entered with the phlebotomist the smell hit again and flooded the small room. My heart sank. It was the smell of a baby’s nappy in desperate need of a change. I just wanted to go home or at least have the floor swallow me up.

I looked at my husband trying to speak to him with my eyes to check if he could smell anything. I probably looked like I had a severe tic so not the best idea under the already awkward circumstances.

The smell quickly dissipated again, which was slightly odd as usually if a bag leaks the smell is there until you sort the issue out.

My blood was quickly taken and I thanked the lady, grabbed my crutches and walked as fast as possible out into the street.

Did You Smell That?

I asked my husband immediately did I smell?  He said no but confirmed my fear that he definitely could smell something when we were in the rooms. We got into the car and I checked my bag (thank goodness for tinted windows). My bag was perfect. No smell, no leak!

We looked at each other & burst out laughing😄

It was the lady in the rooms. We realised the smell in the collection room was worse when she bent over to get something out of the cupboard.

Hmmm….obviously something she had for lunch.

While I felt slightly bad for laughing, I can’t tell you how relieved I was it wasn’t me.

Just goes to show that even though I am comfortable with my stoma even I was pointing the finger at me first.

Moral Of The Story

So, moral of the story….if you are in a room with someone who you know has a stoma and you smell something odd, please don’t assume it’s them. In all likelihood their Stoma bag is protecting any smells. In all likelihood it is someone else.

I’m just so glad, on this occasion, it wasn’t me 😊