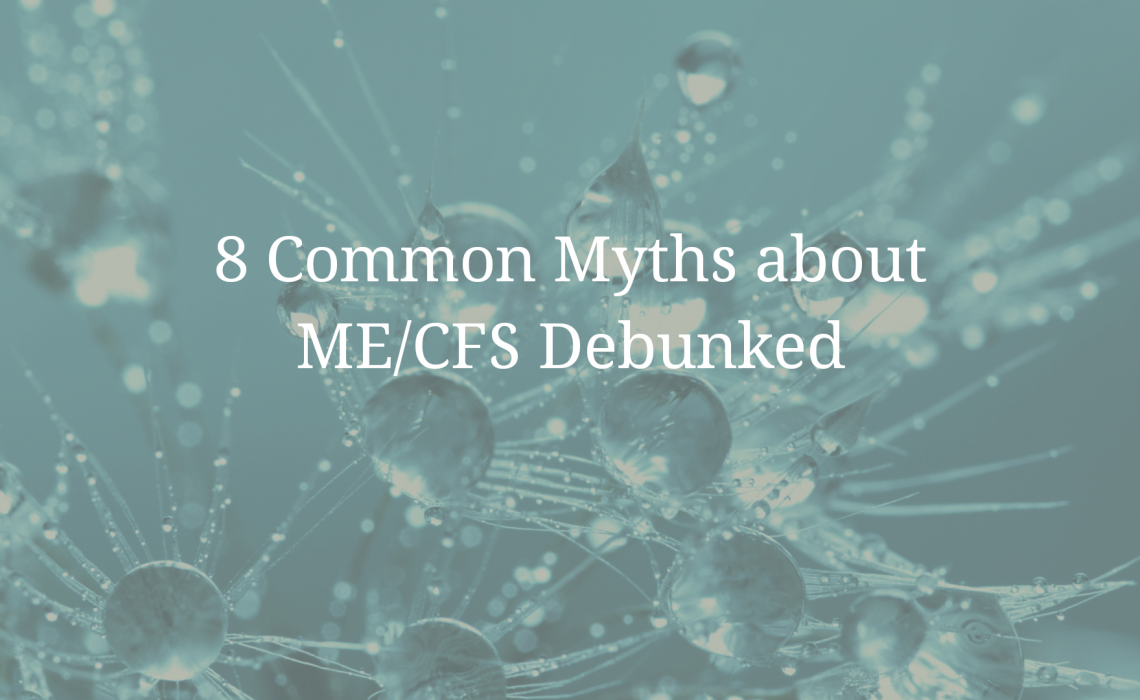 For ME Awareness month I want to tackle some of the common misconceptions surrounding this debilitating illness.

The lack of belief and ignorance surrounding ME is deep-rooted and causes significant harm to patients worldwide.

Due to the disbelief, misconceptions, and stigma that are attached to ME, patients can often wait years for diagnosis, and treatment is inconsistent.

Exactly where this misinformation comes from isn’t clear, but years of disbelief from medical professionals and misrepresentation within the media have definitely added to the ignorance and abuse we receive as ME sufferers.

First up, here’s a brief introduction to ME;

ME is also known as Chronic fatigue Syndrome (CFS) but this name, although widely used in the medical profession, is controversial amongst the ME community mainly due to the fact that it perpetuates the myth that ME is just fatigue. In the rest of this article I will refer to Myalgic Encephalomyelitis as ME/CFS, only because this is the most widely used term.

ME/CFS is a devastating multi-system disease that causes dysfunction of the neurological, immune, endocrine and energy metabolism systems. People with ME/CFS experience debilitating pain, fatigue and a range of other symptoms associated with post-exertional malaise (PEM), the body and brain’s inability to recover after expending even small amounts of energy.

There is currently no cure or effective treatment for ME/CFS.

Most patients are unable to work full-time, and up to a quarter of ME/CFS patients are housebound or bedbound.

The exact cause of ME/CFS is unknown although patients often experience symptoms following a virus or infection.

And if you would like to read first hand experience about what it’s like to live with ME, please read: What we wish people knew about ME. #MEwishes Campaign

There is a great deal of mythology surrounding ME/CFS. Here are a few of the more common myths. Please take a few minutes to educate yourself – who knows when this information could help you or a loved one.

1. Myth: ME/CFS is just being tired all the time

This is probably the most common myth about ME/CFS.

Fact: Although profound relentless fatigue is characteristic of the disease, ME/CFS is much more than being tired.

“ME/CFS is a serious, chronic, complex, and multisystem disease that frequently and dramatically limits the activities of affected patients.” – Institute of Medicine (IOM) Report ME/CFS 2015.

2. Myth: ME/CFS is a mental disorder

Fact: The truth is numerous studies have documented abnormal immune system, endocrine system, and nervous system function in patients with ME/CFS. None of this is consistent with a primary psychiatric diagnosis.

“There are now thousands of published studies that show underlying biological abnormalities in patients…It’s not an illness that people can simply imagine and it’s not a psychological illness.” – Dr. Anthony Komaroff, Harvard University

The World Health Organisation (WHO) classifies ME/CFS as a neurological disorder in the International Classification of Diseases, and has done so since 1969.

The US Institute of Medicine (2015) conducted an extensive review of the evidence and concluded that ME/CFS is ‘a serious, chronic, complex, systemic disease’.

The US National Institutes for Health confirmed ‘ME/CFS is a disabling physical illness and stated that the medical profession has been responsible for causing distress to patients with ME by ignoring patients’ calls for medical help and failing to adequately research the disease.’

“ME/CFS is a biological illness, not a psychological disorder. Patients with ME/CFS are neither malingering nor seeking secondary gain”. Center for Disease Control and prevention (CDC)

Fact: Although more prevalent in women, ME/CFS affects all genders, social groups and all ages, including children.

This myth can be damaging for male sufferers and also children who develop ME/CFS. These groups of patients often face increased ignorance, leading to years of suffering before ME/CFS is correctly diagnosed.

4. Myth: ME/CFS only affects a certain ‘type’ of person

Another common myth is that ME/CFS only affects people with a ‘type A’ personality, and that it is caused by stress. This myth probably came about due to a number of cases of ME/CFS in the 1980s which were given the damaging nickname ‘Yuppy flu’.

Fact: The truth is, there is no evidence to suggest a certain personality type is more likely to develop ME/CFS, or that ME/CFS is caused by stress.

The notion that illnesses can target people with certain personality traits (the “Type A” personality) has no medical or scientific basis.

Fact: The truth is, ME/CFS symptoms can be as disabling as multiple sclerosis, systemic lupus erythematosus, rheumatoid arthritis, congestive heart failure and other chronic conditions. ME/CFS places a substantial burden on people with the condition, their families and carers, and hence on society – according to The NICE Guideline (2007).

Although the severity of impairment differs greatly from patient to patient, 25% of people with ME/CFS are severely affected (housebound or bedbound). And sadly ME/CFS can kill.

This myth is a dangerous one. As many people, including medical professionals, do not think ME/CFS is a serious illness, patients often don’t get the specialist care they need, and medical help is inconsistent. Patients are often neglected, and this neglect leads to unnecessary suffering and death in some cases.

6. Myth: ME/CFS is a rare condition

Historically ME/CFS has not been discussed in the mainstream media, in fact it’s been largely ignored. So you could be forgiven for thinking it was a rare condition.

Fact: But the truth is ME/CFS is not rare, it affects an estimated 250,000 people in the UK, and up to 65 million people worldwide.

If we compare this to other illnesses; ME/CFS is more prevalent than MS and HIV infection.

If you know 100 people, you know at least 1-2 with ME/CFS. So, It’s very likely that someone you know has ME/CFS, although they may feel unable to discuss it with you due to fear of not being believed.

The NICE Guideline (2007) states: “ME is a relatively common illness”

7. Myth: ME/CFS is difficult to diagnose

Fact: If GPs have trouble diagnosing ME/CFS, it is primarily because they lack knowledge about the illness, not because the illness is difficult to recognise.

Any experienced ME/CFS specialist can diagnose the disease. Click here to find out more about diagnosis criteria.

ME/CFS is diagnosed by excluding other illnesses that share the same, or similar symptoms.

In the case of a complex illness like ME/CFS, specialists take a detailed history, and order immune system and other tests to rule out the possibility of endocrine, autoimmune, or other diseases with similar symptoms.

8. Myth: You can exercise your way out of ME/CFS

Fact: The truth is, many studies have shown that ME/CFS symptoms get worse after exercise. A regular exercise program not only can exacerbate ME/CFS, it can cause relapse.

ME/CFS patients experience a worsening of symptoms following any activity. This is referred to as Post-exertional malaise (PEM) and it is a key symptom of ME/CFS that causes a spike in symptoms and a massive energy crash after what, to other people, would be minor exertion.

This particular myth originated as the result of a study called the PACE trial. The authors of the study claimed that after a year of graded exercise therapy (GET) and CBT, patients with ME/CFS improved. Many researchers and doctors have since discredited these findings, pointing out that the study design was seriously flawed, and that the results of the study in fact showed no significant clinical improvement.

Sadly, the flawed results from the PACE trial were used to establish NICE (The National Institute for Health and Care Excellence) treatment guidelines for ME/CFS. These treatment guidelines, GET and CBT, still remain in place today, although a review is due to October 2020. The NHS use NICE recommendations as guidance, and adopted GET and CBT as the primary treatment for ME/CFS in the UK.

There has been much criticism about the PACE trial, and rightly so. This flawed study has lead to a lot of unnecessary harm to ME/CFS patients and has also contributed to the myth that ME/CFS is a mental disorder. It also shifted the focus of funding and research away from much needed biomedical studies.

David Tuller (DrPH) has investigated the PACE trial and has written a number of articles detailing the many flaws in how the trial was conducted, and the results interpreted. Please read ‘TRIAL BY ERROR: The Troubling Case of the PACE Chronic Fatigue Syndrome Study’ for more details.

“That you can exercise your way out of this illness, that is just not true. You can exercise, but you have to be extremely cautious. It will not cure you…. If a doctor sends a patient to the gym to do endurance exercise, that’s going to be a disaster. Doctors do that all the time and these patients get much, much worse.” – Dr. Nancy Klimas, ME/CFS Expert, Nova Southeastern University

Education and awareness surrounding ME/CFS is desperately needed so these misconceptions can be corrected. That’s why ME/CFS awareness events like Millions Missing, and virtual demonstrations are so important.

Thank you for reading.