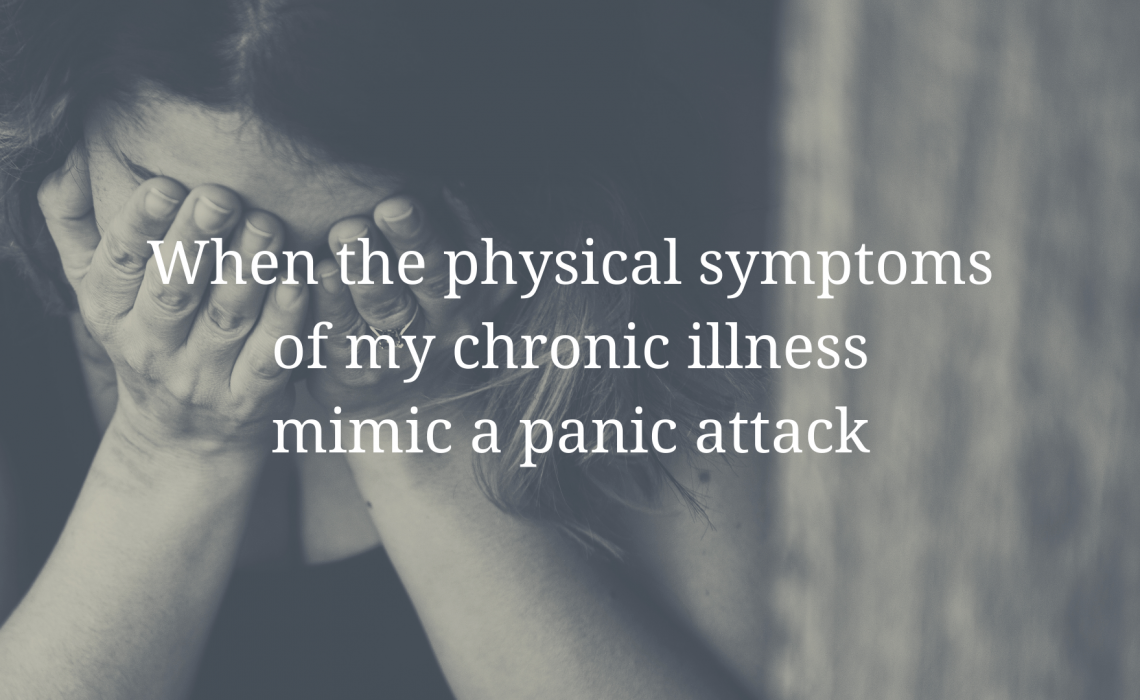 Foreword: I wrote this post before my recent heart problems, but I now know more than ever that physical symptoms can mimic those of mental health conditions. Atrial Fibrillation (AF) and the palpitations that accompany it, mimic the feeling of impending doom that I get in the pit of my stomach when I’m anxious. AF actually feels like I’m on a roller coaster – you know when you go down a big dip or do a loop, you feel like your stomach drops, your heart goes into your mouth and it takes your breath away – it feels like that all the time. The breathlessness, dizziness and palpitations mimic a panic attack and I have a constant uneasy feeling, like something bad is going to happen. I know it’s caused by my heart problems and not anxiety, so I’m managing to stay calm but it is exhausting and frustrating.

I have known for many years that my anxiety and depression don’t just affect my mental health but also cause physical symptoms like fatigue, pain and palpitations. But it wasn’t until my physical health deteriorated that I realised the opposite was also true.

For most of my life doctors have blamed my physical symptoms on my poor mental health – saying my fatigue is caused by my depression, my headaches are because I’m anxious and tense, my dizziness is just a symptom of my anxiety, and they have even tried to convince me I was exaggerating the severity of my pain due to my mental state. Rather than trying to find the true cause of my ill health they would just prescribe more antidepressants or anti anxiety meds. But I knew this wasn’t the full story. I knew that there were many times that my mental health was stable but these physical symptoms were still present. It’s a situation a lot of us face when trying to get a diagnosis of condition that has no definitive test, like ME/CFS. To be told it’s all in your head, when you clearly know otherwise, is enough to bring on a depressive episode.

About 4 years ago, after a long day at a hospital appointment, exhaustion hit. I tried to sleep but I couldn’t rest. My exhausted body was mimicking signs of a panic attack – palpitations, sweating, shivering, dizziness, chest pains and difficulty breathing. I was so exhausted that even the slightest movement was sending adrenaline coursing through my body.

My exhausted mind was so confused by what I was experiencing – it couldn’t differentiate between what symptoms were due to my physical exhaustion, and what were caused by anxiety. My mind was racing trying to make sense of what was happening.

I tried to stay calm and convince myself everything would be ok, but the longer the physical symptoms lasted, the more anxious I became. You see, it’s impossible to rest, let alone sleep, when you have adrenaline running through your body. When you are in the ‘fight or flight’ mode your body and mind are designed to be in a heightened state to help you escape from danger. Understandably this triggered a panic attack. I know I wasn’t anxious before the palpitations started, I know my physical symptoms were the cause, but unfortunately that didn’t help.

My panic attack only increased my exhaustion – my heart rate soared, my body began to shake, I was shivering yet burning up, my skin was crawling and nothing could calm me down enough to sleep. Each time I calmed myself down from one panic attack, a physical symptom like dizziness or a succession of rapid thumping heart beats, started the cycle all over again. It was just one panic attack after another, I can’t remember a time when my anxiety levels were this bad. The more my physical health deteriorated, the worse my mental state became, and the less able I was to deal with these symptoms.

This continued for hours and I can safely say it was the longest night of my life. The longer it went on the more severe my symptoms became. It was a never ending cycle that had no possible positive outcome, I was convinced it was never going to end and by 5am suicidal thoughts started to appear. My heart was pumping so hard and so fast, I thought my chest was going to explode, I truly thought I was going to die, in some ways I wanted to die – I was desperate and so scared.

I did eventually manage to calm myself down but sleep was impossible. My body was in such a heightened state that every time I came close to relaxing my whole body went into spasm. It took me weeks to recover, I literally had to stay comatosed and silent because any movement triggered palpitations. This caused a prolonged depressive episode which included many sleepless and suicidal nights. My anxiety remained heightened for a long time following this incident and it made me scared to do anything even remotely physical, in case it set off another crash. I even limited the amount of talking I did which caused me to isolate myself.

I would love to say this was the only time I experienced such a terrifying incident but the truth is something very similar, if not so severe, happens every time I crash. But this harrowing night taught me how to psychologically cope with these physical symptoms. It taught me that these symptoms aren’t all in my head, and that by staying calm I can minimise the detrimental effect on my health.

Although it was a terrifying night it taught me a lot. It taught me that you cannot separate your physical and mental health, the two are intertwined. It showed me that an holistic approach is vital when discussing health. It taught me that Doctors don’t always know best. It taught me to trust my own instincts and listen to the signals my mind and body are sending me. It taught me the importance of pacing. It taught me the need to focus my mind when I’m crashing. It also taught me how strong I am, and that no matter how desperate a situation may seem, it will eventually end, nothing lasts forever. Take care x.

Do you find the symptoms of your ‘physical’ illness often mimic those of anxiety or panic attacks?