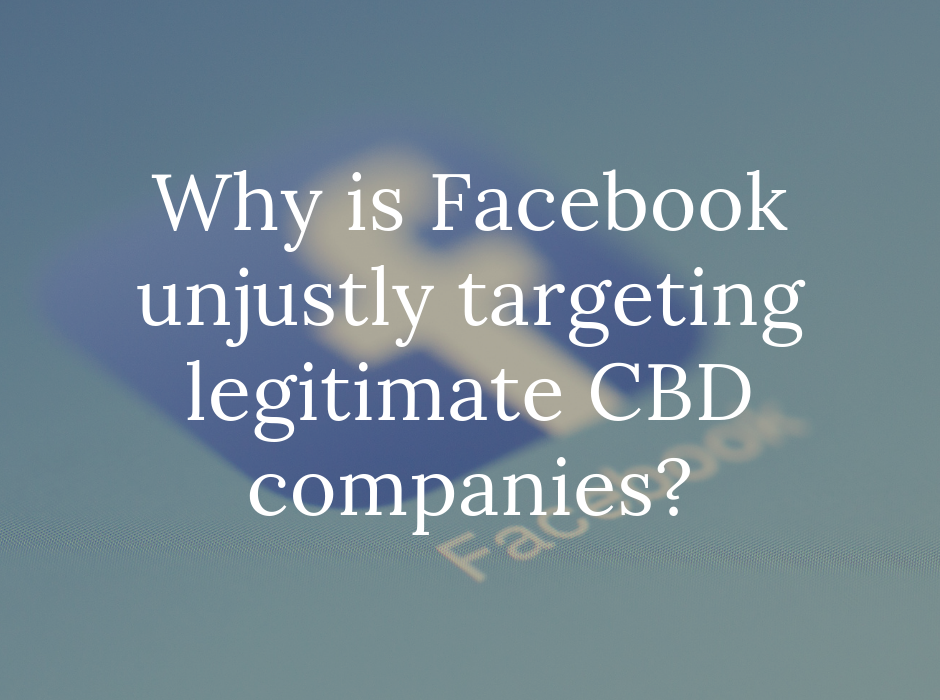 It has come to my attention that over the festive period Facebook has targeted a large number of legitimate UK-based CBD companies, by unpublishing their pages citing; “Your page has been unpublished. [Because it] promote[s] the sale of prescription pharmaceuticals. Pages for online pharmacies are only permitted with prior approval from Facebook.”

Many of these companies, who are working 100% within UK law, rely on social media for a large percentage of their sales, and have spent many years building their followers.

It seems Facebook has taken the Christmas period as an opportunity to take companies off-guard, with many pages being shut down on boxing day. They haven’t even had the decency to notify the companies in question of their actions.

CBD is sold as a food supplement in the UK, not a medicine (pharmaceutical) so the reason given for Facebook’s actions is unjust.

Frustratingly, the appeals process in place is automated, so it’s not even possible to reason with an actual person as to why this action is unwarranted and unreasonable.

What is the justification for their actions?

There are a couple of possible reasons why Facebook has decided to take this action;

But only a couple of weeks the Farm Bill 2018 was passed, which will make the growing and cultivation of hemp federally legal in the US. This landmark legislation will be a game-changer in the US, but the effects will be felt further afield, and it would be expected that the rules regarding the promotion of hemp-derived products on social media would be relaxed, not tightened.

And the companies which I am aware of that have been targeted are UK-based, and in the UK CBD is legally sold as a food supplement.

After hours of trying, I finally managed to speak to an actual person rather than an automated response, via Facebook business support, about this subject.

This is what I was told; “Even though hemp products may be legal in some countries and states. It is not yet defined on the platform [Facebook]. You can read more here:” https://www.facebook.com/policies/ads/prohibited_content/drugs

I tried to reason with the operative I was speaking to, explaining that CBD and hemp are legal and sold as food supplements in the UK, but she insisted that;

“Facebook is an international company, as this is our current policy, this decision can not be appealed at this time”

So basically, because there are places in the world where hemp and CBD are illegal, and because Facebook is an international company, there is a complete ban on the promotion of hemp-derived products on Facebook, no matter what country you are trading in.

Although, the fact that Facebook is stating that these pages “promote prescription pharmaceuticals”, not that they “promote illegal activity”, it appears that the situation in the US may be more at play than the illegal status of CBD in some other countries.

CBD is a compound which the FDA regulates as a medicine (in the GW Pharma product Epidiolex) so it appears Facebook recent actions may have been influenced by this.

So, if you run a CBD or hemp-based Facebook page (or Instagram, as this is also owned by Facebook) be prepared to have your page shut down. Maybe it would be a good time contact your customers or warn your followers this may occur. Or maybe even set up an alternative page that doesn’t mention CBD or hemp, as a back-up.

How to speak to an actual person at Facebook

If you own a Facebook CBD page which has been affected by the recent crackdown, and you want to speak to an actual person rather than the automated response click here and follow these instructions;

Click on the menu bar at the top left on the homepage. Then click on “support” – this brings up a pop-up menu. Then scroll down to “Additional support – chat”. Please note, you need to have Facebook Messenger installed on the device you are using. Good luck.

I have contacted Facebook media centre for an official statement, but so far I have not received a response.