Why are we so quick to judge ME/CFS recovery stories? 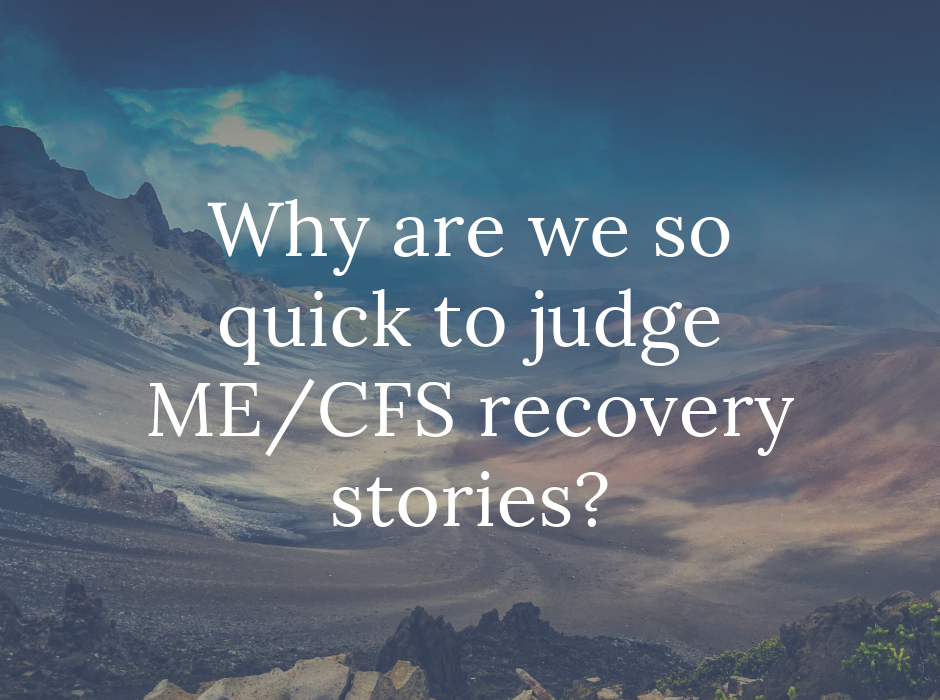 As a community we are very good at supporting each other especially when one of our own is having a particularly bad time with their health. But one thing I’ve noticed, that I find disheartening, is that we don’t give people a safe platform to be open when their symptoms improve. People seem scared to share recovery stories for fear of being judged or told “you didn’t have ME/CFS in the first place”.

We should embrace these stories of hope rather than reject them. We should be elated for anyone that is experiencing a period of remission. We should collect these stories to see what we can learn from them.

Instead people are hiding in the background because they fear a backlash if they are open about their remission.

There have been a couple of incidents recently that have prompted me to write this. The most high profile case is that of Jen Brea. Jen has courageously shared her journey in the hope that it will lead to a better understanding of ME/CFS. But she has faced backlash from the community which she has spent so much time and energy supporting. I have been disgusted by the way Jen had been treated.

Although the majority of us have total respect for Jen Brea and we appreciate everything she has done for the ME/CFS community, there are a minority that have taken this as an opportunity to attack her. Personally, I am so happy that her health has improved and she is able to start to enjoy life again. Why can’t others be happy for her too?

Jen has faced accusations and downright abuse, some claiming she didn’t have ME/CFS in the first place, and others accusing her of promoting potentially dangerous and invasive treatments. Others berating her for insinuating that spinal surgery is a cure for ME/CFS (which she most certainly hasn’t). While others are saying she is perpetuating myths about ME/CFS. And others claiming it was all a big publicity stunt and she was never ill in the first place. All of these are ridiculous claims.

Whenever I see these comments I’m quick to defend Jen, but I don’t understand where this animosity comes from.

Jen has never said spinal surgery is a cure for ME/CFS. And she hasn’t suggested anyone else should have such major surgery. She has openly discussed her particular case, even though she knew doing so would open her up to a lot of criticism (and it certainly has). She’s sharing her story, in a lot of detail, in the hope that something can be learned from it.

ME/CFS is a complex multifaceted condition. We are all aware that when one treatment appears to be successful for one, it can be ineffective, or even detrimental to another. But we all want the same thing, correct diagnosis and effective treatment.

If Jen’s story gives important clues into this debilitating illness, and members of our ME/CFS community, even a few, find relief, that makes my heart fill. Of course the science behind this remission now needs to be studied.

We all need to congratulate Jen Brea on her remission, not play armchair doctors and accept there will be maybe many causes of ME/CFS and keep an open mind, and never doubt anybody’s diagnosis. Let us just be supportive to others with this monster of an illness.

People fear being open about their remission

Another case was a question posed on ME Association’s Facebook page. This was from a person that isn’t high profile within the community, but who felt unable to be open about their remission. So much so that they wanted to remain anonymous. It saddens me that we have created such a negative barrier that people feel scared to share their good news.

This person explained that she has had ME/CFS since 1995 and has fluctuated between mild and moderate. After suffering for a number of years she now feels like she is in remission, following some lifestyle and diet changes. She stated:

“There are a few little things remaining in a very minimal way, but I feel so amazingly well, something that I have only felt once before but this time even better.

I hope it lasts, however, I feel like if I say anything publicly I will be accused of being a fraud or not having ME in the first place as most people get angry if you even suggest that this is even possible.

I don’t think I am cured or anything, I just class it as being in a state of remission, but I don’t even know if that is technically possible.”

Why are we suspicious of ME/CFS recovery stories?

I find it sad that as a community we make it difficult for people to share their recovery stories. People should not fear celebrating their victories. We experience so much trauma and grief within the ME/CFS community, these happy moments should be welcomed.

So why do people feel unable to celebrate publicly? Why, as a community, do we not embrace this positivity? Why do we act so defensively when these good news stories are shared?

I personally have been sick now for about 18 years, although I only became bedbound 6-7 years ago. I have tried a lot of different treatments over that time, but the most beneficial thing for me has been embracing acceptance and letting my body rest. Listening to my body and respecting it has brought about the most improvements.

I’m probably as guilty as the next person about being sceptical when I hear stories of remission, especially when they are based on lifestyle changes. This may be because I have tried so many things and they haven’t worked for me.

But what we have to remember is we are a diverse bunch. What works for some doesn’t work for others. ME/CFS is a complex condition and until we know more about the causes shouldn’t we keep an open mind?

As long as that person isn’t forcing their views and treatment practices on us, I cannot see why we are so reluctant to let these people speak.

I understand people’s concerns about false claims. We are often targeted by scammers promising “Miracle cures” and we have to protect our community. But there is a big difference between scammers preying on us and genuine individuals sharing their stories of remission.

Maybe years living with ME/CFS has hardened us and made it impossible to hope for a recovery? Hope can be a scary thing when you have been so ill for so long.

Maybe our own desperate situation makes it hard for us to celebrate other people’s good news? Maybe years of hope being crushed by numerous setbacks and deteriorating health does not permit us to even contemplate a healthy or happy future for ourselves? Maybe it makes us feel like we aren’t trying hard enough?

Or are we just being protective of a community that has been judged so severely over the decades?

I’m not sure what the true reason is, but what I do know is; Everyone wants the same thing .. to be well again. It’s ok to be a bit sceptical about treatments but it’s not okay to bash anyone about their own personal journey.

I want to be part of a community that supports all its members, through the bad times and the better times. Is it time to create a safe place for people with ME/CFS to share their recovery stories without fear of judgement?

What are your thoughts?

EDIT: I knew when I wrote this post that it would attract a lively debate and some negative comments. But I didn’t realise to what extent people would object to the message. I understand people are sceptical about recovery stories and we need to protect our community from scammers looking to sell us miracle cures. We also need to make sure ME is seen in a realistic light in the media, and sadly journalists often publicise stories of remission as cures. There is no cure for ME (yet) and I have been very careful not to use this term in my post.

But some people with ME do experience periods of remission, sometimes many years, and we need to give these people a safe platform to discuss their stories without fear of judgement. I am not talking about a platform in mainstream media, I’m talking about a safe environment within our community.

Since publishing this post I have been contacted by numerous people who themselves are experiencing improved health, and some are in remission. But they all contacted me privately rather than comment on my post because they fear a backlash if they are open about their recovery. I think this is so sad. These people are not scammers looking to force their views and treatments on us, they are just individuals who for whatever reason have experienced improved health.

Imagine being part of a supportive community for years and then either being rejected by that community because your health has improved, or being so scared of the backlash that you have to keep your good news a secret. I understand sharing these stories has to be done in a sympathetic way, but at the moment we are not even allowing these discussion to take place. Surely we can learn from these individuals?

I understand that hearing these stories can be upsetting for people who are still severely ill. I understand because I am one of those people – I have been bedbound now for 7 years. But the default response to stories of remission is “they didn’t have ME in the first place” and I believe this is a dangerous response. We do not know exactly what causes ME and there isn’t a definitive test for it, so how can we adopt a blanket response that dismisses these individual’s stories and invalidates their voice?

This is of course just my view and everyone is entitled to have their own opinion on this matter. But people do not have the right to attack others just because they experience improved health – personal attacks are not ok.