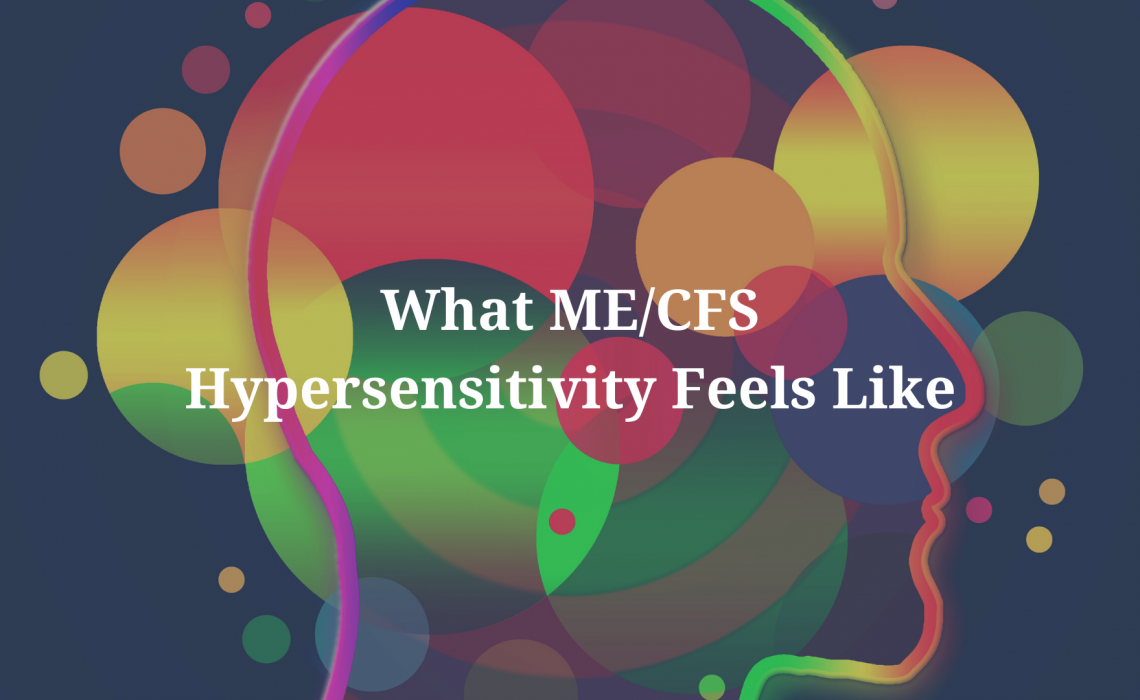 Some of the symptoms that accompany ME/CFS are really bizarre – It’s hard for friends and family to understand. Sometimes strangers on the internet, doctors, peers, even friends & family don’t believe us – sometimes we even doubt ourselves.

This is why I share my experiences with ME/CFS, especially the bizarre symptoms. You’re not alone, you’re not exaggerating, this is real…

I recently shared a post about ME/CFS hypersensitivity, and about how isolating it can be. I also attempted to describe how it feels:

“The best way I can describe how noise, touch, sound and chemicals etc feel to me is, they feel ‘raw’ – like the nerve pain from a toothache. I know it sounds odd, but even the slightest stimulus feels overwhelming and intense.”

I received so many comments along the lines of: “Me too”, “thanks for putting into words how it feels”, “you described it perfectly”, “no one understands”. But also many people shared their experiences too, and took the time to describe what this hypersensitivity feels like to them. Thank you 💙

I thought it might be beneficial to others for me to combine these comments. So in this post I’m first going to go into a little more detail about my experiences with hypersensitivity, and then share some of your excellent descriptions. Maybe this will help others understand this highly misunderstood symptom?

A few days ago I had an incident with a carer who completely disregarded my noise hypersensitivity, and no matter how much I explained the pain she was causing, she refused to adjust her actions.

I’m not going to go into detail about the incident, but I would like to try to explain how my ME/CFS body reacted to the noise, and how days later this one careless action is still having a negative impact on my health.

How my ME/CFS body reacted

The sudden noise caused my body to go into shock – this is the best way I can describe it. It’s commonly called the ‘fight or flight stress response’ – it’s how our bodies respond when threatened in a scary situation.

My heart immediately started racing, my breathing became heavy. Intense pain flooded my body – like a raw nerve pain. I began to shake uncontrollably, and struggled to speak. I felt like I was being attacked. My tinnitus screamed, and I had the intense urge to run away – I needed to escape the onslaught. Panic set in, and I cried lots.

For days my body has felt like I’ve been in a fight – I’m sore and bruised. My exhaustion levels have been unbearable, and I still feel panicked. My heart races every time I talk or try to do even the smallest activity. My tinnitus still hasn’t settled, and my pain levels are still raised. This one incident has meant increased hypersensitivity for days now, with every little stimulus heightening my symptoms again.

I know this sounds melodramatic. I know why hypersensitivity is so misunderstood by people who don’t experience it – it sounds ridiculous. But it is my reality.

How would you describe this hypersensitivity to someone who’d never experienced it?

Here are some of your experiences with ME/CFS hypersensitivity – thank you for taking the time to respond:

Like injections in the head with a large needle

@thefairiegirl: “With sound it feels like injections in the head with a large needle, much like a migraine with vibrating speakers all around your head. While on a carousel enclosed in a small, vibrating glass booth. I feel similar with cluster headaches minus the extreme fatigue. I feel almost instantly faint with a cluster headache. I also get very dizzy with sound in general. For the pain it’s like being at a concert in a small, super crowded space while getting smashed against a wall, pinned and elbowed while someone is pinching me.”

@jessiemay107: “For me noise hurts my brain, I am better at tolerating light but not too bright”

@visiblyme: “Hurts my brain”- yes!! It’s also like the more stimulus, the more overloaded my brain gets. It also exhausts me completely – Like pulling the plug.”

@its_whitney_witch: “Yes! This is so hard to explain. It really feels like I’m allergic to modern living. Screens? Nope. Artificial light? Hell no. Any pre packaged or convenient food? Nononono”

Annabell Ison: “Completely understand, this is how a migraine feels for me – everything is raw. People don’t understand just how awful even a ‘pleasant’ smell can be to the wrong person. I’m ultimately very lucky this goes away for me with the migraine, but I don’t take it for granted, knowing there are people who feel like this 24/7. It’s a distressing way to live, hope it passes or at least let’s up even just a little soon. 💜”

@justinetimeforanap “I describe it like a full body migraine”

@dang.moron “I also deal with the cumulative effects of otherwise minor stimuli. Once a threshold is passed my whole nervous system goes haywire. I would answer the question “what hurts?” by showing a diagram of the nervous system and replying, “that.”

@neurodivergentcoach “I think there’s a link between ME and neurodivergent burnout. Everything above is common in autistic people.”

I live at night because light makes me so sick

@stillhere28 “«Allergic to the world» Exactly what I say!! It makes me crazy to be honest. Thanks for sharing this, it’s exhausting. I live at night because light makes me so sick. I used to Get PEM from listening to running water. Like.. You can’t make this shit up.”

Elaine Vaughan: “To me, everything feels like sound. It’s always there, it just changes in terms of volume and pitch. When the “sound” feels very loud and high-pitched, I can’t “hear” anything else — I can’t make sense of what people are saying or of what I’m reading and I can’t make decisions. I just want to scream at the whole world to shut the f—-up. At those times I need darkness and silence.”

My body just fails from the pain

Terry Whitehead: “Very good explanation. I actually get nauseated and can’t focus my eyes when painful stimulus overwhelms me. My body just fails from the pain. I’m sorry you are in a flair. Water from a bath hurts, air hurts, light hurts. It’s like a full body migraine.”

Blake Bacon: “For me it feels like being electrocuted”

@skatergirl70: “I’m glad you managed to describe how it feels! I’ve been trying to put the feeling into words that make sense. Sets my teeth on edge. It’s like body toothache 😬”

Sounds & smells are the worst for me

@SpoonieTees_: “Sounds & smells are the worst for me. I’m always armed with various earplugs, but can’t avoid outside odour. My house air purifier is awesome for removing my evil neighbours log burner smoke. It’s odd how it gets worse with age. Most humans lose their senses, but we gain them!”

@thane_black: “Yes.. at a certain level of ME severity it seems to become dominated by an extreme fragility where every little bit of incoming stimulation is dialed up to 11. Everything feels like an assault.”

@suehoar76: “The trouble is it is unseen too so people have no idea what you are going through.”

@mamabedlam004: “Thank you #DisabilityTwitter for letting me know I’m not crazy.”

That sense of siege where there’s no escape

@LutomskiJames: “That sense of siege where there’s no escape, not even in sleep. I know how much it hurts. All the best to you.”

Even my own tears would cause blistering on my cheeks

@J_E_Barnard: “That’s exactly how I used to put it too. Even my own tears would cause blistering on my cheeks. I hope you get some relief soon.“

It’s one of the biggest challenges we face

@engaging_life: “It’s really one of the biggest challenges because there’s no cure I know of and so it’s ceaselessness definitely needs to be addressed more often than some illnesses. Mindfulness meditation, self compassion, sticking with limits for optimum health and setting good boundaries requiring even more energy and strength… where’s my soft bubble inside with a flexible shell and that flies hah ha so I can go anywhere more easily? Asking for my friends. Hugs!”

@Elsbellsblue: “It’s extraordinary isn’t it. And the worst is being in a health care situation, THAT exhausted, trying to curate it all, rarely if ever, to any avail.”

@Janet22onalik: “That’s a very good description!  Hard to believe that such simple normal things cause such pain.”

@stinger_dr: “What a fantastic article! I hope that many ppl not familiar with #ME will read it too, since I can’t recall many other texts describing their hypersensitivity this well. Thank you!”

@livingnexisting: “I must admit, this is something I hadn’t understood at all until I experienced it.”

Elaine Levett: Sending lots of love. It’s one of the things I hate most and people struggle with the concept 💛💙💜

@missalexclaire: “Thank you so much for this post, it’s nice to know I’m not alone with this. Its one of the things I really struggle to explain to people, especially how a smell can cause me such excruciating pain and discomfort ❤”

Liz Ward: “Gentle hugs. I suffer with this with my fibro. It’s so exhausting and trying to explain it to people is even more exhausting.”

Thanks again to everyone who took the time to describe their experiences with ME/CFS hypersensitivity, and to everyone for your kind words of support.

How would you describe ME/CFS hypersensitivity?