Have you been a victim of medical gaslighting? 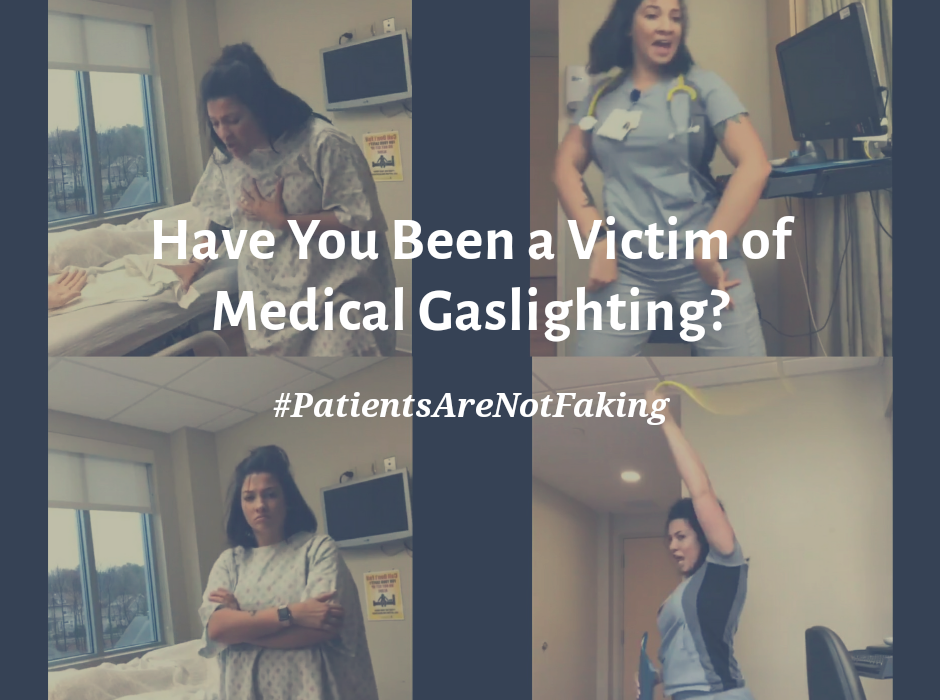 Trigger warning; the examples of medical gaslighting highlighted in this post may be distressing to some.

There is growing awareness around the prevalence of medical gaslighting, especially amongst female patients. Last week tens of thousands of people took to Twitter to share their horror stories of neglect from medical professionals under the hashtag #PatientsAreNotFaking, following a disturbing viral video that was posted mocking certain patients.

However, medical gaslighting is not a new phenomenon, it has been going on for centuries. Historically, women have always been pegged “hysterical” and “mental” by men and the predominantly patriarchal medical profession. And I’m sure many of my readers have their own personal stories of disbelieving doctors.

But what is medical gaslighting, and how does it pose a risk to patients?

Gaslighting is a tactic in which a person or entity, in order to gain more power, makes a victim question their reality. Anyone is susceptible to gaslighting, and it is a common technique of abusers, dictators, and narcissists.

The term comes from the 1938 stage play Gas Light, in which a husband attempts to drive his wife crazy by dimming the lights (which were powered by gas) in their home. When his wife points it out, he denies that the light changed.

Gaslighting is an extremely effective form of emotional abuse that causes a victim to question their own feelings, instincts and sanity, which gives the abusive partner a lot of power. Once an abusive partner has broken down the victim’s ability to trust their own perceptions, the victim is more likely to stay in the abusive relationship.

I have experienced gaslighting myself in past relationships, from people who I regarded as friends, on social media, from employers, and most worryingly from medical professionals.

Unfortunately, evidence shows medical gaslighting is so common, the mistreatment and neglect of patients, particularly women reporting symptoms like pain, is not the exception, but the rule.

The consequences of gaslighting can be very serious. We are often accused of being hypochondriacs or unreliable witnesses of our own experiences that results in subsequent doctors dismissing our symptoms. Often treatment is withheld, the condition gets worse, and we suffer for years, or die.

Medical gaslighting can take many forms. Do any of these sound familiar to you?

As I have briefly mentioned, a TikTok video showing someone posing as a nurse mocking patients, went viral last week.

For those of you that haven’t seen the Tik Tok video, it shows “D Rose” posing as a patient dressed in a hospital gown, struggling to breathe and in distress. It then cuts to D Rose dressed as a nurse. Instead of helping the patient, she starts dancing in time to her laboured breathing. It then cuts back to her as a patient; she suddenly stops “pretending” to be ill, folds her arms and glares at the nurse for being found out as a faker.

The Caption reads; “We know when y’all are faking 😂😂”

I will not be linking the video in this post. It already has over 20 million views, and 131k likes, and I refuse to contribute to that.

This video angered many, and rightly so. Tens of thousands of people took to Twitter to share their horror stories of neglect from medical professionals, under the hashtag #PatientsAreNotFaking, created by @Imani_Barbarin, and it was grim reading.

Imani Barbarin initial reaction to the video, which launched the hashtag, summed up how many of us felt;

“That video of the nurse dancing not believing patients has stirred up a lot of trauma for many in the disabled community and BIPOC communities. People get killed because of that mentality. You did a whole video to tell us you’re bad at your job. #PatientsAreNotFaking” @Imani_Barbarin

Here are a few examples of medical gaslighting which were shared on Twitter;

“wife went to the ER. Bad headache for days. Nausea. Tinnitus. They did blood tests and imaging. The doctor said, “we can’t find anything,” Then to me, “are you paying her enough attention?”. She stood, collapsed. Later dxed with intracranial hypertension. #PatientsAreNotFaking” @SimonoffBob

“I bled through every feminine products I used, within an hour. My doctor at the time tried to “fix” the bleeding with birth control. I have stage four endometrial cancer. #PatientsAreNotFaking” @Sarah_Samedi

“I was told multiple times over the course of several weeks in & out of the emergency room that I was having panic attacks & needed to calm down/relax. Turns out, it’s extremely hard to relax when you’re having your first attack from Multiple Sclerosis (MS).

“I was accused of being a drug seeker in a rural MN ED because I came in with back pain at 2:30am that made me sob uncontrollably. Months later I would finally be listened to by a female nurse practitioner who diagnosed me w/stg 4 Hodgkin’s lymphoma at 19 y/o. #PatientsAreNotFaking” @realslimsheyla

“The first rheumatologist I went to 4 years ago called Child Protective Services on my family because she believed I was faking my pain to get my parents medication. I’ve now been diagnosed with EDS, rheumatoid arthritis, and fibromyalgia. #PatientsAreNotFaking” @JeninaB12

“I was having rectal bleeding, severe weight loss & chronic constipation for a year. Told it was periods & an eating disorder (I was recovered). Sent home from A&E three times, told to eat bananas. Bowel perforated, large intestine removed & a stoma bag. #PatientsAreNotFaking” @hattiegladwell

“In the ER w/3rd degree burns to my leg. All of a sudden, couldn’t breathe, hands were swollen, thumbs felt like they were going to snap off. Told to relax & calm down. That I was hyperventilating. It was an anaphylactic reaction to morphine. #PatientsAreNotFaking” @GraceCordovano

“I’ve interviewed 60+ folks with dx’ed chronic illness about their entire health histories. I am not exaggerating when I say that every. single. one. of those patients was implicitly or explicitly accused of faking before getting a dx. #PatientsAreNotFaking” @bennessb

The video creator responded to this criticism;

“D Rose” showed no remorse for the distress she caused and refused to apologise or take down the video. She wrote; “I absolutely will not be bullied into apologising or deleting a video because some people disagree with me.”

This response was very disappointing. Rather than reading the tens of thousands of replies to get an understanding of why the video was so offensive and dangerous to those of us living with chronic illness who have experienced medical gaslighting first-hand, she completely dismissed our concerns.

While thousands of people took to Twitter to share their horror stories of neglect from medical professionals, some doctors felt the need to push back with the hashtag #NotAllDoctors – completely missing the point. When will medical professionals believe the true extent of medical gaslighting, and the danger it places on the welfare and lives of patients?

Why this video is so dangerous

I think the problems highlighted by this disturbing video are pretty obvious, but for those that still believe it was “just a joke” and we “shouldn’t take it so seriously,” please let me explain in simple terms; This video, and others like it, put patients lives at risk. Patients are not punchlines.

This is way more than just a distasteful ‘joke’ that people find insulting. It exposes a huge crack within medical systems that patients fall through everyday. Pain is disregarded, illness disbelieved, and people end up losing their lives thanks to attitudes like this nurse.

“So many black, Indigenous, people of colour, disabled people, trans people, queer people have very difficult experiences at the doctor’s office with (getting) nurses, medical professionals to believe us about our symptoms and diagnoses,” she said, adding that the video being retweeted so many feeds was “very traumatic for a lot of disabled people.”

What’s most disturbing, is the video has over 130k likes. This sadly proves the full extent of the problem, and the misconceptions about patients who seek medical help – people truly believe many of us are just faking our symptoms, and drug seeking. It really says a lot about how people view sickness and disability, and why the chronically ill are perpetually mocked and marginalised.

My own experiences with medical gaslighting

Before being diagnosed with ME/CFS, my physical symptoms were dismissed for years as anxiety and depression, by numerous GPs. Doctors just kept prescribing antidepressants. Unsurprisingly they didn’t help, in fact the side effects made me a lot worse. No matter how many times I explained my physical symptoms, I was told it was “all in my head”.

In my teenage years and early twenties my ill-health was solely blamed on my weight, even recurring tonsillitis and migraine which both had a devastating impact on my health.

I have been told by doctors that I’m exaggerating my pain, and that my anxiety was causing palpitations and chest pain which was later diagnosed as a heart condition. I’ve been mocked and accused of being a hypochondriac and attention seeker. And frequently been told there’s nothing wrong with me and sent home. Read more about my experiences here.

We are not faking it! – please believe us

Of course, this disbelief is not just isolated to the medical profession. The wider perception that many chronically ill people, especially those with invisible illnesses, are just faking it, impacts on our day-to-day lives too. We are confronted by members of the public for using disabled parking spaces. We are mocked for requesting priority seating on public transport. We are accused of faking our disability if we dare to stand up from our wheelchairs in public. We are targeted as scroungers if we apply for disability benefits that we are rightly eligible for.

The fact that this video got so many likes is a depressing reminder of the true extent of the neglect we face as patients. Videos like this one perpetuate the myth that the majority of patients seeking medical treatment are just faking it to get attention, or drug seeking. It’s upsetting to see this in 2019 but patients are still mocked and blamed by so many medical professionals, and sadly the general public too.

“I would encourage anyone working in healthcare to read the stories of #PatientsAreNotFaking. Our hidden curriculum in medicine often teaches us to discount patient symptoms. It’s dangerous and unethical. Listen to your patients.”

My final word on this is to anyone within the medical profession who still doesn’t see the harm caused by videos like this, or the full extent of the problem with regards to medical gaslighting:

Don’t doubt your patients. Believe us. We don’t want to be in your hospital. We just want fair treatment. Your disbelief and neglect costs lives. Please take a few moments to read through the devastating stories under the hashtag #PatientsAreNotFaking – these are real people who have been let down by your profession.

Have you been a victim of medical gaslighting?